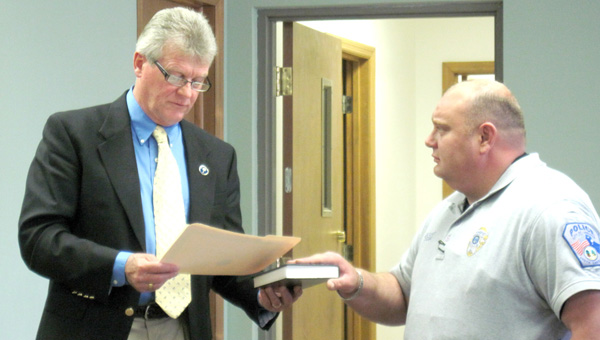 Landrum Mayor Robert Briggs swore in Tim Edgens as the city’s new police chief Tuesday, April 10 during the monthly city council meeting.
Edgens was appointed to replace former Landrum Police Chief Bruce Shelnut, who retired March 31.
“Once again I just want to mention that the vote was unanimous,” Briggs said. “We appreciate the hard work you’ve done for us so far and look forward to working with you as chief.”
Edgens started his first shift as chief the evening of March 31 and immediately had a full plate. That evening a Landrum businesswoman was assaulted outside the back door of her business. Since the incident, Edgens said the department has been working hard to identify suspects in efforts to make an arrest.
“We had a pretty busy week this first week – I had a lot of big things going,” Edgens said. “In my first hour we got hit with that [Landrum businesswoman assaulted].”
Edgens began working for the Landrum Police Department as a lieutenant in 2005 under Shelnut. Prior to coming to Landrum he spent six years as a police officer or reserve officer in Spartanburg County. For two years before that he worked as a dispatcher for Spartanburg 911.
Edgens said he is one of those people who dreamt of being a member of law enforcement even as a child.
“It’s all I’ve ever honestly wanted to do, and the guys I work with here are some of the best guys I’ve ever worked with,” Edgens said.
Edgens’ mother, Brenda Forester, said she was proud beyond belief of her son.
“Tell her what you told me when you found out,” Forester said to her son. “He called me and said, ‘Mom, I’ve been working for this all my life.’”
Edgens said he is also working to make sure his department is provided with the right people in the right positions and the right equipment. Some of his first orders of business were to promote Jason Coffin from sergeant to lieutenant and Greg Irwin to sergeant.
Edgens is also working with Landrum City Administrator Steve Wolochowicz and the Landrum City Council to finalize the purchase of a new police car, as almost all of the fleet is currently running on more than 100,000 miles.