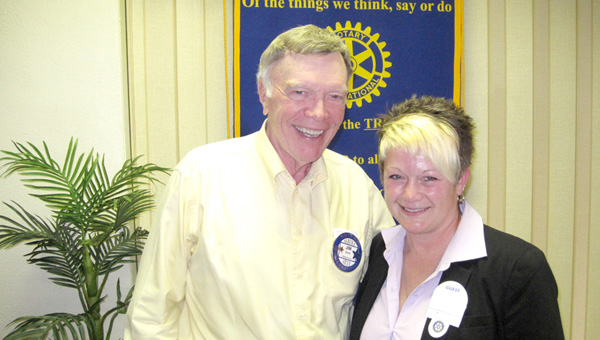 Selena Coffey of the Foothills Humane Society (FHS) was the guest speaker at a meeting of the Rotary Club of Tryon. Coffey, who recently was named as the society’s executive director, came to Polk County from neighboring Henderson County, where she served 16 years in local government administration. A native of western North Carolina, she completed her undergraduate degree and her graduate degree in public administration from Western Carolina University. Coffey told the Rotarians about the work of the Foothills Humane Society, which she said has an open admission policy and an extremely successful record in placing pets. Coffey attributes the organization’s success to the many volunteers who give their time and resources. Pictured are Jim Scott, who arranged the program, along with Coffey. (photo submitted by Bill Hillhouse)