BBBS to make Have a Heart annual fundraising event 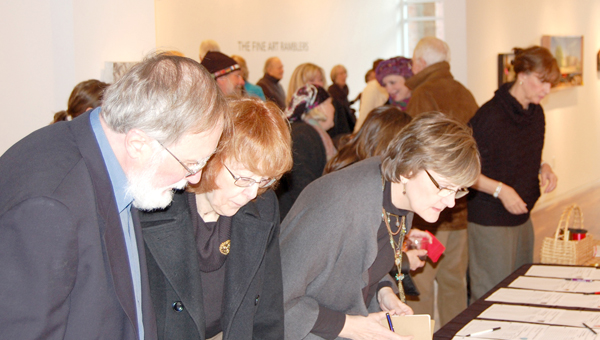 Larry and Gretchen Boyd (left), Sharon Kolbye and Beth Laughridge check out the status of bids on the HeArts at the Upstairs Artspace during the closing bids reception. (photo by Doug Dacey)

Jim Cornell approached Karen Dacey, coordinator of Big Brothers Big Sisters (BBBS), with a fundraising idea last fall. Cornell, an area potter, offered to make blank ceramic heart forms, along with Doug Dacey, for area artists to embellish.
More than 40 artists created 70 works of “heArt.” Most were designed on and around the ceramic forms, but two area metal workers created their own heart designs for the fundraiser as well.
The Upstairs Artspace hosted the silent auction project during its opening show of 2012. Following a large opening night turnout, a steady stream of guests visited the Upstairs throughout the run of the show to view the art exhibits and place bids on their favorite hearts.
Karen Dacey said, “Sofia Dow kept calling from the Upstairs with exciting updates on the bidding progress, just as thrilled as we were with the public response to this event.”
Many showed up for the closing bids reception, with even a few bidding battles going on.
Cornell said his one driving thought throughout the project was, “It’s for the kids – the children served through the BBBS mentoring programs.
BBBS officials said they were so pleased with the favorable results of the Have a Hearts fundraiser that they intend to make it an annual affair. Artists are already lining up to participate.
For more information about Big Brothers Big Sisters or the hearts project, email polk@bbbswnc.org or call (828) 859-9230.
– article submitted
by Karen Dacey