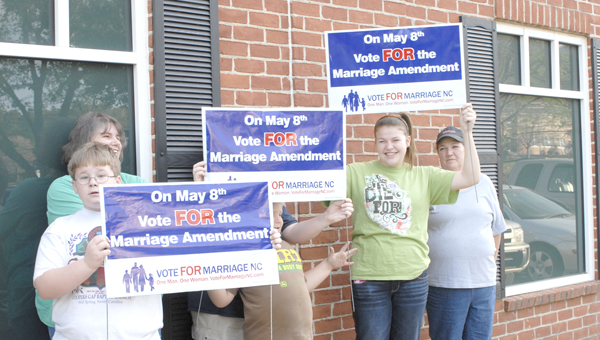 Some of the people who stood outside the Womack building to support N.C. Amendment 1 before the county commissioners’ meeting Monday, April 3. (photo by Leah Justice)

Crowd size forces move to courthouse
Nearly 200 people packed the Womack building in Columbus Monday, April 2 for a meeting in which the Polk County Board of Commissioners was expected to consider a resolution in support of N.C. Amendment 1. Amendment 1 is a proposed amendment to add a new section to the state constitution stating that marriage between one man and one woman is the only domestic legal union that shall be valid in the state.
Several children stood outside, holding signs in favor of the amendment, with many in the crowd arriving up to an hour early to ensure they would get a seat. The crowd grew so large the meeting had to be moved to the courthouse, because the Womack building meeting room holds only 160 people.
Once the meeting opened in the courthouse, the first action commissioners took was to remove the resolution from the agenda.
Commissioner Ted Owens first made a motion for the resolution to be moved higher on the agenda because of the number of residents who attended, but commissioner vice-chair Reneé McDermott amended Owens’ motion to remove the resolution from the agenda. McDermott’s motion to remove the item passed 3-2, with McDermott, chair Ray Gasperson and commissioner Cindy Walker approving the removal and commissioners Owens and Pack voting against the removal.
From the crowd, a solid “boo” was heard, and one man shouted, “Start looking for a new job.”
Commissioners did allow residents to speak on the item during citizen comments at the end of the meeting, after speeches on the topic from all commissioners. Nearly 20 residents spoke, with some giving their strong beliefs that marriage should be only between a man and a woman and others saying laws shouldn’t take away citizens’ rights and commissioners shouldn’t endorse a state issue one way or another.
Rev. Warren Elliott said he doesn’t care what the United States government or anyone else says, he is going by what God says about marriage. He said it doesn’t take a rocket scientist to figure out, “When God made two people, he made man first and from the man he took a woman and so therefore, a man and a woman is God’s plan for a home life.”