Foolish fun comes back to Tryon 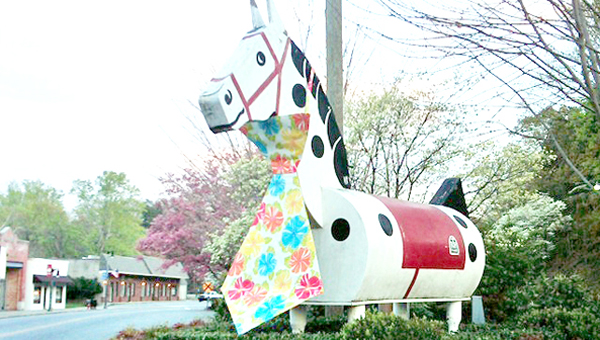 Morris the Horse wearing a giant tie in honor of the April Fool’s Festival this weekend. (photo submitted)

Neckties strung along Trade Street in Tryon and around Morris the Horse’s neck proclaim the pending April Fool’s Festival this weekend.
The gaiety of the event spread through town two weeks ago as city employees hung the ties from light post to light post.
The idea for the neckties originally came from the mind of Bill Jones.
Jones was born in Tryon but spent most of his working life in Atlanta. When he moved back here to live on Lake Lanier, he tried to encourage the community to hang neckties throughout the town.
“I moved here from Atlanta years ago with about 1,000 neckties I had collected. So I talked to so many people trying to get this idea going, and finally Kathleen Carson picked up on it,” Jones said. “My thought was it might could grab some national attention for the arts here.”
Jones, grand marshal for the Fool’s Festival parade, said he thinks the April Fool’s Festival shows what a wonderful community Tryon is to live in.
“I’m thrilled, I’m thrilled (to be the grand marshal) and I guess it was because of this necktie project I had suggested several years ago,” Jones said. “I will wear some kind of crazy costume and do anything I can to help Tryon.”