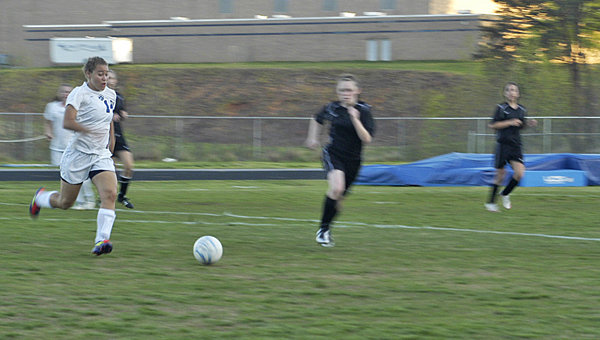 No. 14 Lyric Flood works her way around Avery defenders on her way to the goal late in the game. Flood scored the first goal of the night for the Lady Wolverines off a free kick from about 35 yards out. (photo by Samantha Hurst)

Polk County’s women’s soccer team took down Avery County at home with a score of 2-1 Monday, March 27.
Coach Lennox Charles said though he would have liked to see his team finish with a higher score, he felt they did build their intensity toward the end of the match.
“Bottom line is we came out with a win, but we’ve got a tough week ahead and we have got to play at a higher level than we did today,” Charles said.
Polk faces Thomas Jefferson on Wednesday, March 28 and Hendersonville on Friday, March 30. Charles said both teams handily won over Avery County earlier this season.
While the Wolverines may not have ended with the score Coach Charles would have liked to see, he said it wasn’t for lack of trying.
The Lady Wolverines took upwards of 20 shots on goal during the game including several inside-the-box shots off the foot of No. 16 Allie Clayton. Charles said if Clayton could have gotten just a bit more power on those shots she would have seen a score or two.
No. 14 Lyric Flood nailed the first score Monday night off a free kick from 35 yards out, Charles said. Teammate No. 13 Samantha Kirby grabbed the Wolverine’s second goal on the evening with an assist from No. 11 Jennifer Page.
The Wolverines held the Vikings scoreless until the last 20 minutes of the game. With exactly 16:45 left on the clock the Vikings sailed one into the Wolverine goal off a corner kick.
“We should have put the game away a little bit sooner and not have to fight in the end to keep the win,” Charles said.
Charles said his team is still working to get its rhythm after losing six starters last year. He said he does have a good group back including five seniors who are all starting. He said the trick has been keeping everyone healthy and finding the right balance to have the Wolverines playing at their ability level consistently every game.
The Lady Wolverines are 4-4 on the season and 4-0 in their conference.