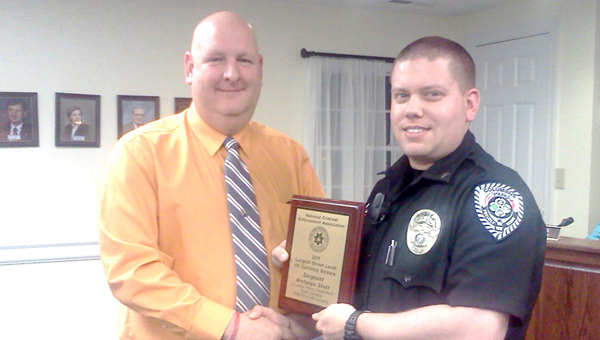 Sgt. Nicholas Stott received an award from the National Criminal Enforcement Association and was recognized at a conference in Tulsa, Okla. March 12-16.
Stott received the award for his work during an Aug. 6, 2011 seizure of $159,785 along Hwy. 108.
Columbus Police Chief Chris Beddingfield and Stott attended the conference. Beddingfield presented information about the conference to Columbus Town Council on Thursday, March 22.
“Sgt. Nicholas Stott was recognized and received an award from the National Criminal Enforcement Association for his interdiction work in making the largest street level U.S. currency seizure within the organization,” Beddingfield said.
Stott’s seizure resulted from a routine traffic stop and was referred to as a “cold” stop because Stott had no prior information or tip from another agency or person, Beddingfield said.
Beddingfield said the money Stott seized was sealed in plastic and concealed in a manufactured hidden compartment in the floor area.
The conference included more than 800 law enforcement officers from the United States and Canada and was a combined effort between the National Criminal Enforcement Association and Desert Snow, both nationally recognized organizations that provide criminal interdiction training and networking for sworn law enforcement officers.
Beddingfield and Stott received training in Oklahoma and heard guest speakers, including Michael Neal, the Arkansas Game and Fish officer who stopped a deadly shootout in West Memphis, Ark. and Charlie Hanger, the Oklahoma state trooper who stopped and arrested Timothy McVeigh shortly after the Oklahoma City bombing.
Beddingfield and Stott also visited the Oklahoma City bombing memorial and the Oklahoma City National Memorial Museum.
Beddingfield told council he feels like he’s in front of them all the time bragging on Stott, but Stott works night and day, writes grants for the department, signs officers up for training and answers calls. Beddingfield said Stott has been recognized by Mothers Against Drunk Driving and now he’s been recognized by a national organization.
“He is outstanding,” Beddingfield said. “We are truly blessed to have him.”
Beddingfield said it was an honor to have Stott walk on stage and see a huge Columbus Police Department badge there. He also showed part of a video from the conference with pictures of Stott and the money seizure.
“It is not often that an officer receives a national award or national attention for his work,” Beddingfield said. “It is truly an honor for Sergeant Stott to be presented this award by experienced and exceptional law enforcement interdiction specialists. It is also an honor for the Columbus Police Department and the Town of Columbus. This award demonstrates the level of training and professionalism within the Columbus Police Department.”