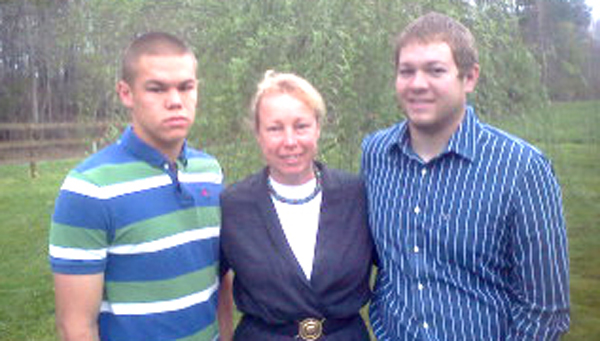 Colleen Abril said she felt helpless as she watched firefighters battle the blaze that destroyed her home Tuesday, March 20.
But what truly caused her to catch her breath, she said, was the sheer number of people who came to her family’s aid.
“We just really appreciated everyone who came that night – friends, family and all of the first responders,” Colleen Abril said. “It’s amazing how everyone gets out there at that time of night and stays till one or two in the morning.”
Colleen said she and her sons, Davie and Christopher, are just thankful for the people who came to help that night and the days since.
Davie, a senior at PCHS, was the first to come home that night to find the fire. It was he who called 911 and tried to make sure no one was inside.
The family spent the day this past Saturday grabbing what pictures could be salvaged from the home’s ruins. Colleen said luckily there were quite a few photos remaining despite most being singed around their edges.
Colleen said the family hopes to be able to salvage more items but must wait to go through the home until after the fire investigation is completed. Colleen said she knows though that their clothes, computers, furniture and other valuables are all gone. This all includes years of curriculum Colleen said she created for her preschool class at the Tuesday School and for her Sunday school kids at Tryon Presbyterian.
And though Christopher has been away at Appalachian State, Colleen said her son comes home every weekend, meaning most of his stuff was in the home as well.
What they were able to save were their seven dogs, four of which Colleen is hoping to find permanent homes for through the Foothills Humane Society.
The Abrils hope to soon be in the position to purchase another home. In the meantime, the family is staying in the home that once belonged to her deceased great-aunt. A group of Colleen’s friends are currently working to put together a fundraiser to be held April 15, 12:30 – 5 p.m. at Polk County High School to help the family. A fund called the “Abril Family Fire Fund,” has also been established at the First Citizens Bank in Landrum.
Anyone wishing to make contributions can stop by the bank or mail a check to 144 North Trade Street, Landrum, S.C. 29356.