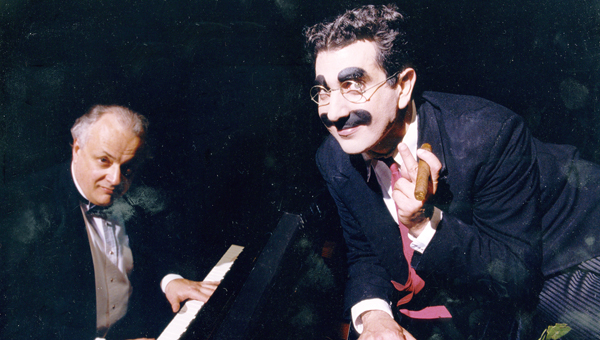 Frank Ferrante brings his award-winning show, “An Evening with Groucho,” to the Veh Stage at TFAC on Tuesday, April 3 at 8 p.m. Ferrante is described by The New York Times as “the greatest living interpreter of Groucho Marx’s material.” “Animal Crackers” and “A Night at the Opera” co-author Morrie Ryskind calls him “the only actor aside from Groucho who delivered my lines as they were intended.”
Discovered by Groucho’s son, Arthur, when Ferrante was a drama student at the University of Southern California, Ferrante originated the off-Broadway title role in “Groucho: A Life in Revue,” portraying the comedian from age 15 to 85. For this role, Ferrante won 1987’s New York’s Theatre World Award and was nominated for an Outer Critics Circle Award. He reprised the role in London’s West End and was nominated for the Laurence Olivier Award for Comedy Performance of the Year.
In 2001, Ferrante starred in, directed and produced the national PBS television program “Groucho: A Life in Revue.” When not touring with “An Evening with Groucho,” Ferrante stars as the comic lead in the European cirque “Teatro Zinzanni” in San Francisco and Seattle.
Jim Furmston, musical director/piano, Ferrante’s accompanist since 1984, has enjoyed a versatile career as recitalist, accompanist and composer. His performances have garnered international acclaim in both worlds of classical and popular music. Furmston was invited to perform a debut recital at New York’s Lincoln Center and also performed on the inaugural program of the Arnold Schoenberg Institute.
In Hollywood, Furmston has accompanied many stars, collaborating over the years with Billy Davis, Marilyn McCoo, Nell Carter, Carol Channing, Debbie Reynolds, Joel Grey, Sally Struthers, Jane Seymour, Jeff Goldblum, Brian Stokes Mitchell, Gene Barry, Ann Margaret, David Hasselhoff and John Rubinstein, to name a few.
“I expect that our audience will belly laugh during our show,” Ferrante says. “That’s what it is designed to do… make people laugh hard. And remind them of a classic style of American comedy. Audience members can also expect the magnificent piano playing of Jim Furmston, who also serves as my comedy foil onstage.”
Ferrante will also conduct a master class in comedy acting for local students and adults. Ferrante’s performance is presented with funding from Main Stage Supporting Sponsor TD Bank and Event Sponsor ACTS Retirement -Life Communities.
Tickets are available at the TFAC box office Tuesday – Friday from 10-4 and Saturday 10-1. Call 828-859-8322 for more information, or email info@tryonarts.org.
– article submitted
by Marianne Carruth