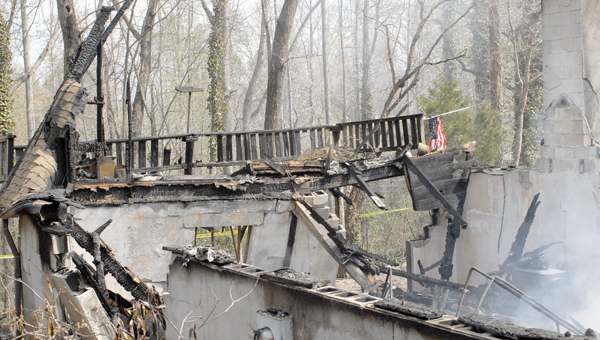 The remains of a deck hang precariously from the unstable foundation of a house on Amy Road in Columbus that fire destroyed Tuesday night, March 20. (photo by Leah Justice)

Fire destroyed a home on Amy Lane in Columbus Tuesday, March 20. The house was fully engulfed in flames shortly after firefighters received the call.
Columbus Fire Chief Bobby Arledge said the fire department received the call around 9 p.m. and because he lives nearby, he was the first to arrive on scene.
“When I came out my door you could see the glow in the sky,” Arledge said. “It was so far involved when we got there, there was no way we could save it. We couldn’t even get close to the door.”
Arledge said within the first 6 to 8 minutes after his arrival, the house had fallen in.
The house, a wooden A-frame home located at 260 Amy Lane off Smith Dairy Road, belonged to Colleen Abril. She lived there with her teenage son, Davie, who came home Tuesday evening, found the house on fire and called 911.
No one was at home at the time of the fire. The family had seven dogs, all of which got out safely, according to family members.
Arledge said firefighters were in defense mode throughout fighting the fire and had to depend on tankers because of the location. The house is located at the end of a one-way drive across a small bridge. Arledge said the department finally got two trucks across the bridge. Tankers had to make trips throughout the evening to the nearest fire hydrant, located almost three miles from the house.
The exact cause of the fire was unknown as of press time. The Polk County Sheriff’s Office is investigating the fire, assisted by the N.C. State Bureau of Investigation (SBI) Fire and Arson Investigative Unit. The Abrils are not suspected of having any involvement in the fire, officials said.
The Columbus Fire Department was back on scene early Wednesday, March 21 to extinguish hot spots at the house. Smoke was still billowing from the ruins as of Wednesday afternoon. The SBI was also there collecting evidence.
The Columbus Fire Department was assisted by fire departments from Green Creek, Mill Spring and Tryon, along with the Polk County EMS, Polk County Rescue Squad, the Polk County American Red Cross and the Polk County Sheriff’s Office. The rescue squad used its ATVs Tuesday night to get workers and supplies to the fire. 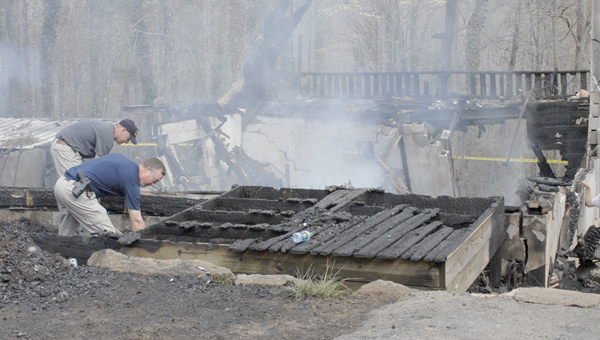 Shawn Smith (in back) and Steve Modlin of the N.C. State Bureau of Investigation Fire and Arson Investigative Unit collect evidence from the home’s remains Wednesday morning, March 21. (photo by Leah Justice).