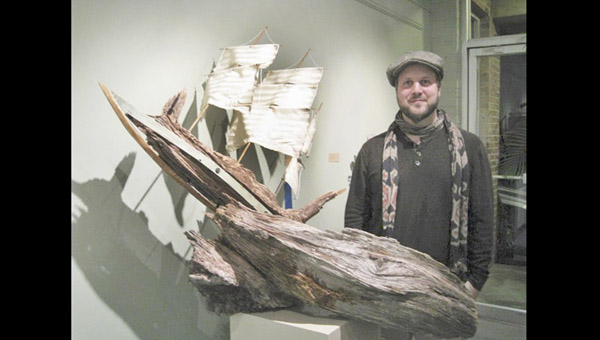 Gallery space at the Tryon Painters and Sculptors (TPS) location off Maple Street showcases works fashioned from rusted tools, scrap mesh, wine corks, bottle caps, sticks woven together and crocheted plastic bags.
All of the works are part of TPS’ Green Piece show, which will run through March 31, said TPS President Aviva Kahn.
“It’s fun, I think, for the people who come because they have to really look at some of the works and they are intrigued by them,” Kahn said.
Capturing first place in the table sculpture category was Clark Loro’s “Moby Dick’s Revenge.”
Loro moved here from New York to be near his mother. He said one day, not long after arriving, he took her dogs for a walk as a refreshing therapy from living in the city for so long. While doing so he began noticing all of the beautiful pieces of wood filling the area behind her home.
He said the particular piece used for “Moby Dick’s Revenge” spoke to him.
“I just liked the shape of it initially – it was huge and I had to dig it out of the ground and put it in a wheelbarrow to bring it out of the woods,” he said.
Loro left the wood in his mother’s garage for about a year to dry out before he really began to work with it. He said the first aspect he noticed was a notch on one side, which immediately made him think of the eye of some sort of creature. He said the smoothness of the rest of the wood brought to mind the image of a whale and then the ocean. Before long the story of Moby Dick was conjured up as his direction.
“I just like to stare at things for a long time and ideas usually come out of them,” Loro said. “My whole philosophy of what I’ve been trying to do here is to create something out of nothing. All I have to do is appreciate what it could become.”
Taking apart a storage shed provided materials for the framework for the ship and thrift store type material fashioned the sails.
Grabbing first place for hanging sculpture was Lindsey Moore’s “Guiness the Guppy.”
As a landscape and portrait  and graphic artist, Moore said this piece was different from his typical work.
“I really enjoyed the creative challenge because it made me simplify down to the elements of the materials I used, but I also put more thought into it than I thought I would,” Moore said.
He said the theme was based on a piece of an old wine crate, which serves as the base of the piece. Since it was curved Moore said he felt it lent itself to the form of a fish. Before long it all came together.
“As more of a visual artist for painting it really made me look at things from a three-dimensional frame,” he said. “I am very just very pleased and honored to be a part of the show.”
“Guiness the Guppy” showcases the image of a guppy made from the end of a broom, an old neon orange work glove, clothespins and paintbrushes.