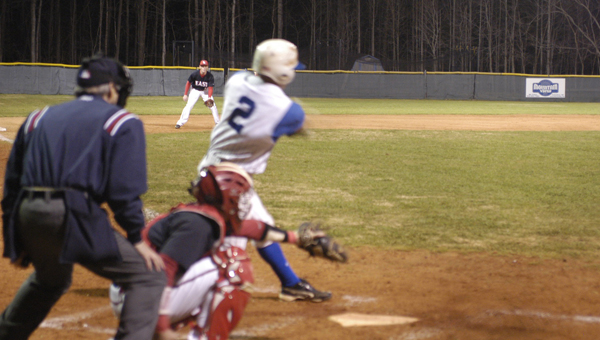 No. 3 Dylan Turner takes a hard swing at an East Rutherford pitch. (photo by Samantha Hurst)

The Polk County Wolverine baseball team put the first run up Tuesday, March 6 but couldn’t sustain the early momentum falling  8-2 to East Rutherford.
“We played a little better than in recent games,” said Head Coach Ty Stott. “We are still learning to play with a new team, we’ve only been together for 3 1/2 weeks now, and we lost a lot to graduation last year. So it takes time to learn to work together and we get better every day and every week.”
Dylan Turner opened the game as pitcher, playing three 1/3 innings in which he allowed seven runs (five that earned runs) and gained one strikeout. The hottest bat for the Wolverines was Tyler Ridings who went 4-4.
The Wolverines face Asheville Christian Academy tonight, who they have beaten the three times they have played them. Stott said it is usually a close game, though. The team plays West Henderson March 9.