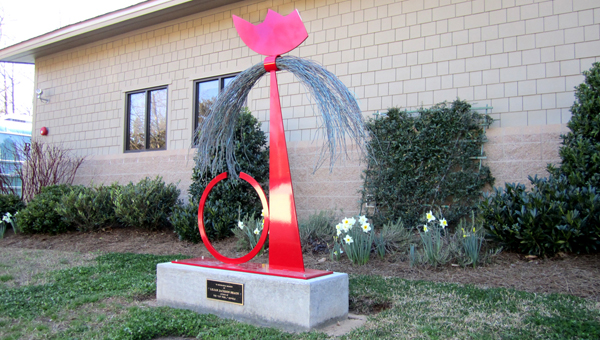 Donated in honor of local author Lilian Jackson Braun
Visitors to the Polk County Public Library (PCPL) in the past few weeks may have noticed a new piece of art outside the library. 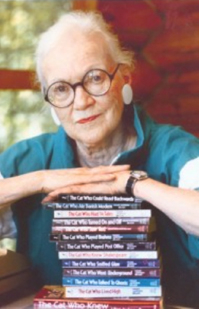 Lilian Jackson Braun with some of the 29 books in her “The Cat Who” mystery series. (photo submitted)

The new artwork, created by Mayo Mac Boggs, was donated to the library in honor of local author Lilian Jackson Braun by her husband, Earl Bettinger. The statue is an artistic interpretation of Koko and Yum Yum, the cats in Braun’s well-known “The Cat Who…” mystery series. Inside the library are photos of the actual pets that were the inspiration for the books.
According to PCPL Director Cindy Nanney, the statue is a duplicate of one Bettinger and Braun have had for years at their home.
Nanney said Bettinger talked about how much Braun loved libraries in general and the Polk library in particular. After Braun’s death on June 4, 2011, Bettinger said he wanted to do something for the library in honor of his wife. He commissioned the artist, Mayo Mac Boggs, to make a copy of the statue and donated it to the library.
“We are very honored to be the recipients of this gift,” Nanney said. “Lilian Jackson Braun’s work and her love and support for this library will be long remembered.”
Braun wrote 31 books, including 29 “The Cat Who…” books and two collections of short stories. After Dutton published her first book, “The Cat Who Could Read Backwards,” in 1966, The New York Times labeled her “the new detective of the year.”
“The Cat Who” mysteries have been translated into 16 languages, distributed worldwide and sold in the millions. Her books were standards on the New York Times bestseller list.  Beginning in 1990, her books reached the prestigious list for 20 consecutive years.
Braun lived for many years in Michigan before retiring to Tryon, where she lived for the last 23 years of her life.
In 2005, the Polk County Public Library in Columbus held a tribute to Braun for her lifetime achievement and community involvement. It was an evening of song, limericks, readings and tributes. Braun served as the honorary writer in residence for the library as well as honorary chairperson of the 2005 library card sign-up campaign, for which she created the tag line, “A library card is the beginning of a lifelong adventure.”
The library plans to hold a dedication ceremony for the statue later this spring.
“We’re going to hold a celebration when the weather warms up a little,” PCPL’s Tracey Daniels said.“We are also grateful to Cynthia Terwilliger, who has been a huge help in coordinating this project.”