Johnson: Tryon firefighter of the year 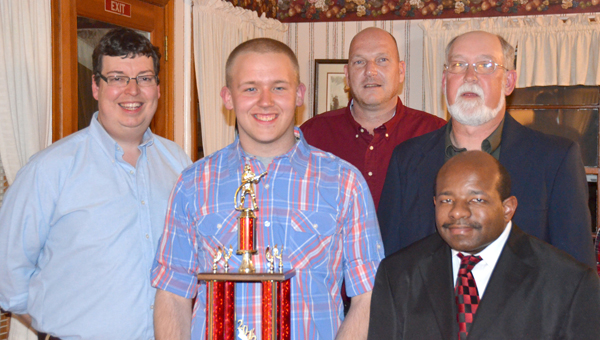 Wesley Johnson with the trophy he won for being named Tryon Firefighter of the Year. With him are (left to right) Tryon Fire Chief Joey Davis, Deputy Fire Chief Johnny Hipp, Assistant Fire Chief Marshall Lipscomb (far right front) and longtime former assistant chief Bob Scoggins. Hipp, Lipscomb and Scoggins have all been named firefighter of the year in previous years. (photo by Leah Justice)

18-year-old is youngest recipient in award history
Wesley Johnson, 18, was named the youngest ever recipient of the Tryon Fire Department’s Clarence G. Scoggins Firefighter of the Year award.
The Tryon Fire Department held its annual Ladies Night on Wednesday, Feb. 22 at Caro-Mi and gave out various awards for 2011.
Johnson has been a member of the Tryon Fire Department since 2007, joining as a junior firefighter. In 2011, Johnson was in the top percentage of the members for total number of emergency calls responded to at 149 and had 232 training hours.
Johnson is currently attending the Spring 2012 Firefighter Academy at Cleveland Community College. Upon graduation from the nine-week class, Johnson will be certified as a Firefighter II in North Carolina. The course involves 440 hours of training and is seen as one of the top academy-style fire schools in the state, said Tryon Fire Chief Joey Davis.
Johnson plans to join the U.S. Navy following graduation to continue his firefighting career.
“I’m very proud of Wesley’s accomplishment,” Davis said. “To be voted as a recipient of this award by your peers at the fire department truly is the highest honor you can receive at Tryon. The fact that Wesley is the youngest to have won this award really says something. He has been a valuable part of our department since joining in 2007 as a junior firefighter.”
Firefighters, excluding the chief, vote on the annual Clarence G. Scoggins Firefighter of the Year award, which has recognized outstanding firefighters since 1963.
Johnson is the son of Pam Johnson and the late Elmo Johnson of Tryon.
Other awards included two chief’s awards to James “Tank” Waters and Christian Miller. Waters was also recognized for receiving Firefighter II certification last year.
The Junior Firefighter of the Year award was a three-way tie among Ethan Edwards, Savannah Hipp and Daniel Walker.
The first “Ocean Lakes” award went to Johnny Hipp for dedication to the fire department.
Outstanding service awards went to Leah Justice with the Tryon Daily Bulletin for her years of covering articles pertaining to the fire department; to Danny Jones for his service with the Landrum Fire Department; to Polk County Sheriff Donald Hill for his work with the Toy Run and the Needy Fund and to Polk County Sheriff’s Office administrative assistant and Tryon firefighter Kim Pack for her work with the Toy Run, Needy Funds and the soup kitchen.
– article submitted by the Tryon Fire Department 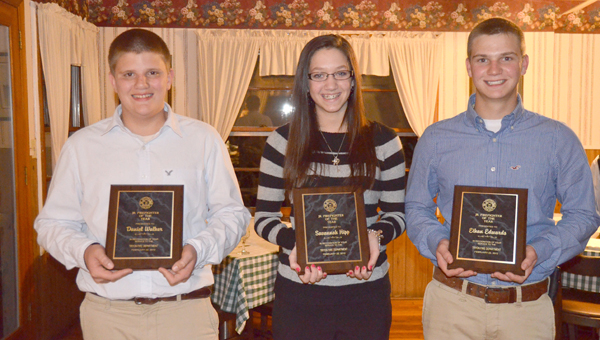 In a three-way tie, Daniel Walker (left), Savannah Hipp and Ethan Edwards all were named 2011 Junior Firefighter of the Year for the Tryon Fire Department. Walker is the son of retired Tryon Fire Captain Gary Walker, Hipp is the daughter of current deputy fire chief Johnny Hipp and Edwards, also the 2011 Green Creek Junior Firefighter of the Year, is the younger brother of Tryon Fire member Nick Edwards. (photo by Kim Pack)

Ordering Super Saturday tickets: Round Robin and after