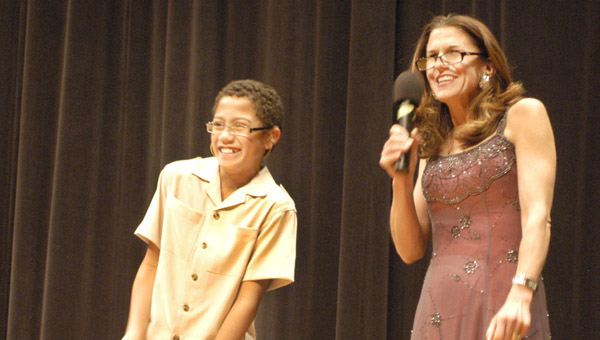 Staley, Stockdale take top honors
The Polk’s Got Talent competition held at Polk County High School (PCHS) Monday night bestowed more than audience eyes could behold as 11-year-olds tapped across, sumo wrestlers danced across and teachers jammed across the stage.
“You’d be hard pressed to find that diverse a collection of talent and individuals in one place,” said judge Aaron Greene. “Yes, the event was a fundraiser but I think people in the audience probably got a really great show out of it.”
Audience members and judges ended the entertaining evening by proclaiming 9-year-old Ki’Yon Staley the winner of the junior division and PCHS alum Noah Stockdale the champion of the open division.
Staley wowed the crowd, and judges, with the range of his voice as he sang an a cappella rendition of the song “Jesus Loves Me.” Stockdale, meanwhile, performed an original song.
Stockdale, currently a senior at UNC-Asheville, plans to put his winnings – $500 – to use in the production of his first album.
“Thank you for coming out… this was a great program and I had a lot of fun tonight,” Stockdale told the crowd after he was named winner of the open division.
Others gaining recognition from the crowd included 17-year-old Cassie Couch and 16-year-old Mollie Nelson, who were second place junior division winners. Couch and Nelson performed an elaborative dance in sumo wrestler costumes to a mix of hit music from the last three or more decades.
Receiving second place in the open division was Project X, a rock band with plenty of enthusiasm and a few familiar faces; several of the members are currently teachers in Polk County schools.
Third-place winners in the junior division were 13-year-old singers Keileigh McMurray and Lauren Stratman, while The Fox Chasers – including PCHS student Austin Freer – grabbed third in the open division. Also receiving honorable mention in the junior division were 10-year-old clogger Madison Yellen, 14-year-old singer Mia Brown, 11-year-old tap dancers Meredith Gillespie and Brianna Richardson and singers Daniel Macias and Talia Petoia.
Receiving nods in the open division were singers Cade Underwood, Madison Alexander and Cole Pellat, Celtic duo Two Folks from County Polk and the band Blues Underground.
Judges for the evening were Greene, Brook Hannon and Susie Kocher.