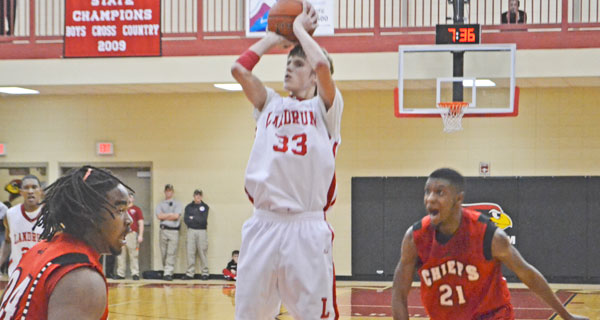 Landrum’s Daniel Bridges goes up for a shot against McCormick on Tuesday night. Bridges scored a game-high 27 points to lead Landrum to an 86-78 victory and a spot in the Upper State Championship on Saturday. (photo by Joey Millwood)

Landrum was clinging to an 80-78 lead with 29.6 seconds left against McCormick in the third round of the 1A state playoffs when Daniel Bridges broke away towards the basket behind the Chiefs’ defense and was fouled on what would’ve been a dunk.

Bridges hit both shots from the line, then darted back down court to play defense and drew a charge. That charge turned out to be the biggest play of the game.

“I thought (the referee) was going to call a block and at the last second he called a charge,” Bridges said. “That was crucial.”

As the seconds ticked off the clock, Landrum punched its ticket to the Upper State Championship against Great Falls at the Bilo Center on Saturday at 12:30 p.m. with an 86-78 victory.

Landrum players and coaches have been throwing around a number all season. That number – 113.26 – symbolized a goal.

That number is the exact mileage from Landrum High School to the Colonial Center in Columbia where the state finals will take place. The Cardinals are one step closer to that goal.

How big was this game?