Landrum City Council members pledged the city’s support for the creation of a Landrum Quilt Trail during their meeting Tuesday, Feb. 14.
“I think that it is a good project – I think it will bring a lot of people here,” said Councilman Johnny Carruth. 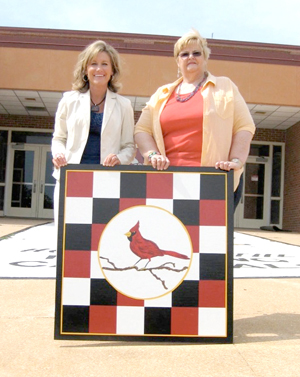 Councilwoman Jan Horton agreed and made a motion that the city provide $5,200 in hospitality tax funding for the project.
Ellen Henderson, a representative for the Landrum Quilters, which plans to organize the trail, said these trails create a lot of buzz for a community.
“[Quilt trails] are known, where they exist elsewhere, to bring in tourism and for the economic impact they have on those towns because the people coming to look at the quilts have to eat somewhere and often stop in other shops along the way,” Henderson said.
Quilt trails originated in Ohio and have grown to include trails in more than 30 states. Henderson said she believes they have grown so popular because many people feel a personal connection with quilts.
“Quilts really tend to bring up an emotional response – someone will say, ‘Oh, I remember my mother quilting,’ or ‘I used to have a quilt like that,’” Henderson said.
A Landrum Quilt Trail as organizers envision it would involve displaying wooden blocks with a quilt square painted on them at various businesses, city buildings and other community buildings around town.
Each square would also have a story displayed alongside it to explain the design’s history, the design’s connection to a community family or how the design relates to a particular business.
The blocks will vary in size, with the smallest starting at 1×1 feet and the largest block being 8×8 feet.
The Landrum Quilters are also pursuing a grant for more than half of the project’s overall budget, which would allow for the project to subsidize the costs for 23 quilts. Businesses that want the quilts would pitch in a portion of the cost.
Four of the blocks would be displayed at city hall, the Landrum fire department, Brookwood Park and the Landrum Depot, once most of its renovations have been completed. Plans for three of the 23 blocks include them being hung in prominent public spaces such as the library, Hospice Thrift Barn and O. P. Earle Elementary. Currently a block already hangs at Landrum Middle School, where the Landrum Quilters organization typically hosts its bi-annual quilt shows.
Landrum City Administrator Steve Wolochowicz said he believes the city was right in lending its support.
“The Landrum Quilters have been before council many times to request non-financial sponsorship for the regular quilt shows they host,” Wolochowicz said. “And all of those shows have brought in numerous people from around the area. I have no doubt this project will as well.”
The Landrum Quilters host a bi-annual quilt show at Landrum Middle School. Last year 1,100 people from 13 different states attended the show.
What the grant wouldn’t cover that the city’s money could is funds to help market and advertise the trail through a website, brochures and other materials.
Henderson told council members that the quilters hope this would only be the beginning of a longer trail to eventually be called the Foothills Quilt Trail. The vision is for the trail to eventually reach from Greenville to Asheville.