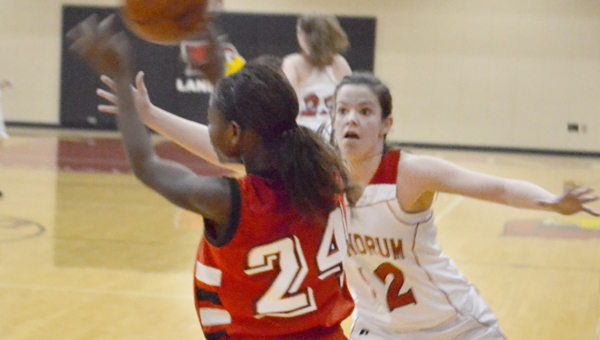 Landrum’s Sydnie Brown plays defense against McBee on Thursday night, Feb. 16. The Cardinals beat McBee 55-51 to advance to the third round of the state playoffs. Landrum will host Denmark-Olar at 7 p.m. on Monday. (photo by Joey Millwood)

The Lady Cardinals are quickly becoming the “cardiac kids.” After breezing through the first round of the 1A state playoffs on Monday, Feb. 13 against Ninety Six, the Lady Cardinals found themselves in another dramatic victory on Thursday, Feb. 16 against McBee.
Just a week after beating St. Joseph’s for the region championship in double overtime, the Lady Cardinals advanced to the third round of the playoffs with a come-from-behind 55-51 victory over the Lady Panthers.
McBee was up 32-21 at the half and the Lady Cardinals were showing flashes of the team that struggled earlier this season. Those memories faded quickly as Landrum came out in the third quarter and took control.
“Early in the game we got a little rattled,” head coach Deon Brice said. “After half time we calmed down and started playing our game.”
Sophomore Taylor Jenkins scored 15 of her 18 points in the game in the second half to lead the surge for Landrum. Jenkins scored 11 of those points in the final five minutes of the game, including shooting 7-for-8 from the free throw line. There were five lead changes in the final two minutes, but Jenkins hit two free throws with 12 seconds left to ice the game for Landrum.
“I don’t think about it,” Jenkins said of the free throws. “I zone everything out.”
Lauren Pitts added ten points for Landrum and Becca Burress scored 12. The Lady Panthers were led by Jamelia James with 16.
Landrum was scheduled to play Denmark-Olar on Monday, Feb. 20.