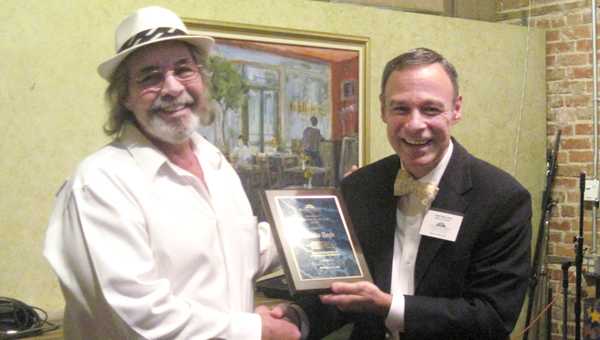 Brady, Nagle win top honors
The Carolina Foothills Chamber of Commerce, during its annual awards banquet Tuesday, Feb. 7, recognized four people the organization felt made a difference in the community in 2011.
The chamber named Steven Brady as its 2012 Business Person of the Year and Dennis Nagle as Volunteer of the Year. The chamber’s annual Pig Awards, given to volunteers who have committed significant years of service to the Blue Ridge Barbecue Festival, went to Jack Holmes, who has for years run the security team, and Jerry Tyner, who manages the infield vendors during each year’s event.
Andy Millard presented Brady the Business Person of the Year award, reminding chamber members that Brady Insurance has been in business for 84 years in Polk County.
“There are not many businesses in Polk County that can match that record,” Millard said. “He [Steven Brady] is the third generation to run the family-owned business and he has taken that business and helped to build it up further with help from partners.”
Brady thanked the chamber for the honor and talked a bit about how his family’s insurance business was created.
“When most people went out of business during the Depression, we went into business because of the Depression,” Brady said.
Brady’s great uncle started selling insurance on the side in 1928 as a means of bringing in extra money for his family. Brady’s father took over in the 1960s and asked Steven to follow in his footsteps in the 1990s.
Twenty years later, Brady said the business remains strong.
“We’ve had a great year and our business has done well. Thank you very much for your support,” Brady said.
The chamber also recognized Dennis Nagle as its 2012 Skip Seaman Volunteer of the Year, because of his general “nice guy” way. The award was named in honor of Seaman because he had worked as a volunteer for the chamber for 12 years. Millard said Nagle embodied that same spirit of community service.
“You think of the term ‘pure nice guy’ and you think of this guy,” Millard said. “The chamber is so rich because of guys like [Nagle].”
Nagle said he was humbled to be recognized.
“This isn’t just for me,” Nagle said. “It’s for mentors like Dale [Musselwhite] and Chuck [Britton] and Andy [Millard]. You all inspire me; thank you.”
Chamber director Janet Sciacca said 2011 was a productive year for the chamber, with 32 businesses joining as members, the hiring of special events coordinator Christina Feagan and 1,004 people attending the years’ Business After Hours events overall. Businesses that held Business After Hours events this year included Stephan Home Repair, Kiveo, Verizon Wireless, Millard & Company, Mill Spring Agricultural Center, Service Master of Hendersonville, Edney Eye Associates and Edney Orthodontics, Rosecrest Retirement Community, Artistry Above, MedAdvocates, The Orchard Inn, TD Bank, Service Master of Spartanburg/Polk, Costco, Thermal Belt Outreach Ministries, Landrum Antiques & Furniture and Foothills Gun Gallery.
“There are so many things we all can be doing to market our businesses,” Sciacca said.
She pointed to opportunities that kept the chamber busy in 2011, such as the third year of the Business to Business program, assistance with the area’s Certified Entrepreneurial Community designation, the Foothills Economic Partnership that has created a new map of the area found at local offices and online, social media workshops for businesses and work on the chamber’s new website, www.carolinafoothillschamber.com.
Sciacca also reminded chamber members of work done through the Chamber Foundation. In 2011, the Chamber Foundation provided grants to the City of Saluda, Polk County Sheriff’s Office, Mill Spring Agricultural Development Center, Town of Columbus Fire Department and the Town of Tryon Fire Department. 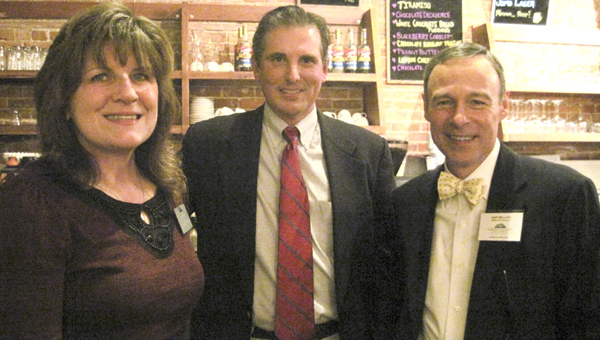