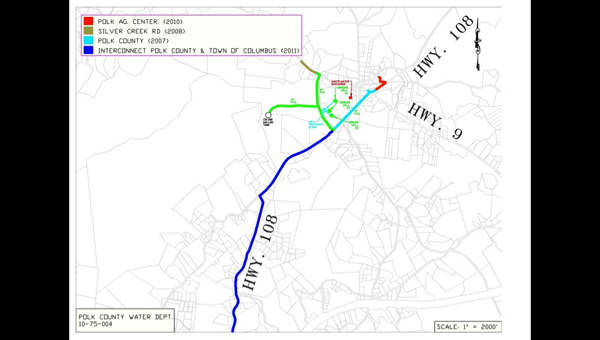 Map showing the line to be built to connect the Polk County and Columbus water systems.

Move is major step toward regional water system
The pieces of Polk County’s water puzzle are slowly but surely coming together.
The Polk County Board of Commissioners met Monday, Feb. 6 and approved a bid of $592,465 from Steppe Construction in Mill Spring to construct a water line from the middle school campus in Mill Spring to Polk County High School, which is where the Columbus water main ends.
The water line to be constructed is approximately two miles of 12-inch line. The construction also includes the installation of 10 fire hydrants.
The bid was approved by a 4-1 vote, with commissioner Tom Pack voting against the bid. Pack explained that although he is one of the biggest supporters of laying water lines in the county, he feels the county did not take care of other issues during budget time last year and shouldn’t spend the money.
Polk will pay for the water line out of its fund balance.
The bid was approved contingent on a public water supply permit being granted from the state.
Commissioners also unanimously approved a water interconnect agreement with the Town of Columbus, which is contingent on Columbus Town Council also approving the agreement later this month. The agreement sets out how the two entities will purchase water from each other. The agreement said the price of the water will be the same as inside commercial water rates in Columbus.
County engineer Dave Odom attended the meeting and reviewed the four bids received.
Steppe Construction was the low bidder, with other bids coming from Davis Grading at $631,015, Marvin Hoyle Construction at $946,059 and Kennedy Concrete & Utilities at $956,790.
Commissioner vice-chair Renée McDermott noted how much lower Steppe Construction’s bid was than the others as she made the motion to approve the bid.
The lowest bid came in around $100,000 over engineer estimates for the line. The estimate made last year was that the line would cost $488,390. Odom said the bids came in higher than estimates because costs of the line are higher and contractors are beginning to get busier.
The bids also included an alternate bid for running the water line up Hwy. 9 from the crossroads during construction. The middle school campus water line already runs to the Mill Spring crossroads where Hwy. 108 and Hwy. 9 meet.
Commissioners will decide later whether to add the Hwy. 9 line to the project, but Steppe Construction also submitted the lowest bid for the alternate construction, at $120,747.
Commissioners will also later discuss a request from CooperRiis in Mill Spring to connect to the county’s water (see page 6).
Odom said in obtaining rights of ways for the water line to Columbus, the county should pick up a dozen or so customers. He said eight to 10 people have already asked to connect and that’s just people from whom engineers are getting rights of way.
“Everybody has seemed to be very positive about it so far,” Odom said.
Polk County first offered to connect to Columbus water last year during joint county/town meetings with Columbus, Saluda and Tryon. The interconnect will mean that all three towns and the county’s water systems are connected.
Polk commissioners also discussed the future of the county’s water system on Monday, Feb. 6. Discussions included connecting Polk’s Green Creek system that connects the Broad River Water Authority to the Inman Campobello Water District to Polk Central School and later to the county’s Mill Spring well system. That connection would create a regional system for Polk and its towns because of Polk’s connection to Broad River and Inman Campobello and Saluda’s connection to Hendersonville and Asheville. Columbus, Saluda and Tryon were recently connected through a water line along Howard Gap Road and Tryon and Columbus were already connected.
See further coverage of Polk’s future water system discussions later this week.
Columbus Town Council will meet Thursday, Feb. 16 to consider the interconnect agreement with Polk County.