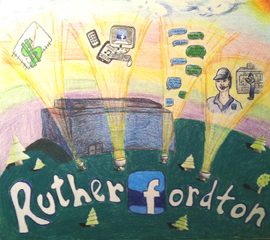 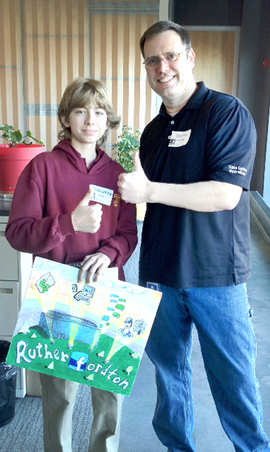 The new Facebook data center opening in Rutherfordton asked local schools to participate in a contest making a piece of art that represented what “worldwide Facebook would mean to the county.”

Nelson, who entered a poster at the urging of his art teacher, Miss Sjoerdsma, was one of many students who responded to the challenge. There were only 10 winners and one grand prize winner.

A ceremony honoring the winners took place at the data center on Tuesday, Jan. 31.

TJCA Headmaster Joe Maimone called Luke’s parents, Rich and Kim Nelson, that morning and suggested they “might want to attend.” The winners and their chaperones were taken to a large room to view all of the entries, which were laid out on tables, before being taken to the hallway where the 10 winning entries had already been copied, printed, framed and hung.

The Facebook representative said Luke’s entry represented exactly what they were hoping for when they conceptualized the contest. He also said “all the Facebook employees really enjoyed” his entry, mentioning specifically “Luke’s three-dimensionality.”

As they were awarded their prizes, each winning artist was asked to describe his or her artwork. Nelson described his artwork by expressing how Facebook would provide revenue and jobs to the county, as well as be the hub for connecting people around the world via Facebook.

Nelson won a monetary prize, a Facebook T-shirt and hoodie.

The artwork will hang in the Facebook data center facility for one year.