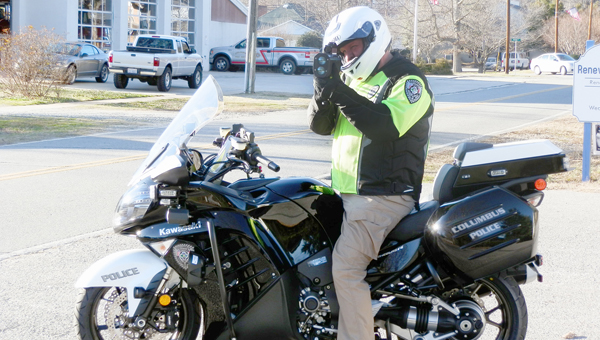 Bike, equipment 100-percent funded by grant
The Columbus Police Department is now the only area department with a motorcycle in its fleet.
The town recently received the 2012 Kawasaki Concours 14 ABS, a model designed specifically for law enforcement, through a N.C. Governor’s Highway Safety Program grant.
The grant funding paid for 100 percent of the motorcycle costs, including all equipment, protective riding gear and training for two officers to become Bike-Safe North Carolina instructors.
Columbus Police Chief Chris Beddingfield announced the arrival of the motorcycle during council’s Jan. 19 meeting. The bike was first used in Columbus last week.
The motorcycle is equipped with the latest traffic enforcement technology, including the Raptor RP-1 radar, which features moving and stationary, same and opposite direction speed clocking, Beddingfield said. The motorcycle also has anti-lock brakes and traction control.
“The motorcycle will be used as a traffic enforcement and community relations tool, but the primary focus will be Bike-Safe North Carolina,” said Beddingfield.
Bike-Safe is a training class taught by motorcycle officers that includes classroom and riding sessions. The focus of the training is on safety, with the goal of reducing motorcycle accidents and injuries.
“The program has been very successful in the eastern part of the state and Columbus police are hoping to partner with the Hendersonville Police Department, the Henderson County Sheriff’s Department and the Rutherfordton Police Department to promote and operate the program in the western part of the state,” Beddingfield said. “Our area here is very conducive to motorcycle enthusiasts and with that comes the potential of accident and injury just like any other mode of transportation. We hope to utilize Bike-Safe to reduce the frequency and severity of these incidents.”
To learn more about Bike-Safe and classes that are offered, visit www.bikesafenc.com.
“The police department has already received a tremendous amount of positive feedback from the community in just the few days the motorcycle has been in operation,” Beddingfield said last week. “We hope to continue and build on these positive interactions with our citizens and business owners.”