Davenport speaks on life as advisor with Afghan army 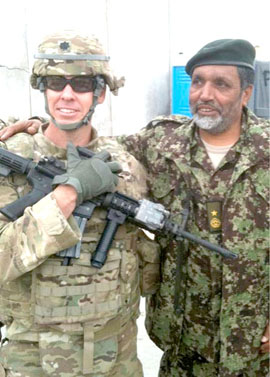 Lt. Col. Richard Davenport from Campobello is a security forces advisor to BG Raziq of the Afghan army. He recently spoke with Barbara Childs about his work with Raziq.
Q. What is a day with BG Raziq like?
A. Up front, he is a highly enjoyable person to be around. You truly need to approach the Afghan people and its culture as T.E. Lawrence approached the Middle East, and that is with respect. My day often consists of meetings with BG Raziq, and they are all been rewarding and memorable. Many times these meetings can last up to four or five hours. We also fly to two provincial security meetings each week.
Q. As a Muslim, does BG Raziq pray often?
A. Yes, prayer is huge in his daily life. I have been to some meetings where he excuses himself to pray.
Q. What do you admire about BG?
A. I admire his strength. He has been fighting battles here for more than 32 years, and he is still fighting strong. He has great faith and is optimistic in his vision for the future of Afghanistan, and he keeps a great sense of humor. He has zero tolerance for corruption, which is a weak point in Afghanistan mainly because of prolonged war that has weakened the culture and civil-military systems.”
Q. What insights have you gained as to the future of Afghan lands, culture and traditions?
A. My perspective says that Afghan is going to be okay. BG Raziq has mentioned that he does not see his country going back to  the days where the Taliban ruled with an iron fist. I think he’s right. I think the future can be like it was in the golden years – those nostalgic years of peace and prosperity that Afghans remember and wish that the country could get back to. It was the Cold War that got the country off the course of peaceful harmonious relations where all Afghan ethnic groups were living together Shona ba Shona (side by side) in Dair and Pashto respectively. The Soviets destroyed the infrastructure of the country and left a huge political vacuum, which was fought over by the war lords and eventually filled by the Taliban. We and the Afghans are still trying to get back to those golden years. They will come through; it just takes time.
Q. How has the religion of the Afghan people and BG Raziq influenced their life choices when it comes to the military and protecting their land and culture?
A. It is their faith that keeps the Afghan people fighting for their country. I would say strongly that their religion and faith continue to be a serious factor in protecting their country.
Q. What are your goals today with your military career in the U.S. Army?
A. One of my ultimate goals is to reach the rank of LTC, which I have already accomplished. However, I would like to make full bird colonel, and I do see that possibility for the future of my military career. I have always enjoyed command, and I would like to continue that aspect of military service. The next command opportunity for me would be battalion command. This could happen after my ANA Security Forces time here in Afghanistan and my upcoming stint at the Command and General Staff College at Fort Leavenworth.