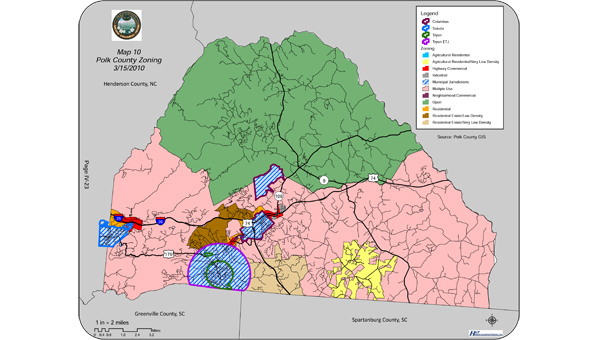 Polk County’s Unified Development Committee (UDO) discussed more than just the Mountainside Ridgeline Protection Ordinance at its Jan. 17 meeting. The group also voted to move forward with a proposal to amend the county’s current table of permitted uses.
UDO Chairman Mark Byington explained that two paths were available.
“We can either move forward with the table of uses that has multiple use  [zoning districts] or go and look at the multiple use areas in terms of a home occupation class,” Byington explained. “I don’t think anyone sitting at this table thinks we’re going to be able to do both, but with either one we can get to the same place.”
A multiple-use zoning district currently covers significant areas of the county. The two options Byington discussed look similar until closer inspection. Under the second option, drafted Dec. 15, many of the things previously permitted in multiple use (MU) districts are no longer allowed or are more heavily restricted. For example, in the Dec. 1 proposal an accessory building under MU could include a loading bay; in the Dec. 15 version it could not.
In the Dec. 1 table all of the following were allowed in MU: accounting agencies, advertising agencies, attorneys, chiropractic offices, contractor’s offices, insurance offices, interior decorating services, medical and dental offices and real estate offices. The only one of these still allowed in MU districts under the Dec. 15 table would be medical and dental offices as special uses, which would mean slightly stricter guidelines to follow for zoning approval.
These are just a few of the examples of the differences between the two options. Those who are interested in obtaining more details about the differences can request a copy of the proposals from the county planning and zoning office.
Byington said other things could certainly be added back into the list of allowable or restricted uses but that, “we can’t have all of those uses allowed plus home occupation II.”
Some of the uses omitted from multiple use zoning in the Dec. 15 proposal would be allowed under a proposed home occupation II allowance.
The businesses listed under home occupation exemptions concerned some UDO members, such as Henry Bright, who said he has in the past personally felt the effects of a home occupation being allowed to locate too close to their neighbors.
“We need to be concerned about those people that are not going to have a home occupation, but are going to have to live next to a home occupation,” Bright said. “I think we have to have a discussion if we want to have these things out in the county under multiple use … I think there’s a lot of people here at tonight’s meeting that may be affected by that decision.”
Planning consultant Dale Holland said before the redraft of the UDO the table of permitted uses had a very liberal list of special and permitted uses. When redrafted it included Class II home occupation because the committee wanted to have that use available as a resource.
Originally some members, including Commissioner Ray Gasperson, wanted to first define new zoning areas before working on the list.
Chairman Byington, however, said it would be difficult to redraw zoning districts if you did not first have an idea of what you would then be putting in those districts.
Holland reminded members too that this vote was simply to decide a direction to proceed, which could be fine-tuned later.
“Then you’re going to discuss what are we going to allow in the home occupation… you may eliminate kennels [for example] or you may reduce the size of the building allowed…” Holland said. “There is a competitive advantage here to the people who live and own property here in Polk County. If somebody from Spartanburg County wants to open a bakery in the mixed-use district, but they don’t live here, they can’t. So the proposed change gives a competitive entrepreneurial advantage to those people that live in and pay taxes in Polk County.”
During public comment, resident Cindy Fisher said she hoped UDO members would work to make it more possible for people to start up home-based businesses.
“Having young children and not knowing the way technology is going to go… I would like to make sure that is not stopped,” Fisher said. “You have the rules of no smell, no noise. I think that should pretty well cover issues. If you can still have your business and not be disturbing your neighbor, I think that is enough [limitation].”
Saluda resident Steve Herring said he felt the issue depended on acreage and location of the home business. He said the important factor was making sure such rules were in place and that a governing body was vigilant in carrying those restrictions out.
Committee member Christel Walter said she felt the Dec. 15 plan, with the addition of the Home Occupation Class II, gave “the citizens of Polk County a much better chance,” by opening the door for more of them to start up home-based businesses in order to make a living.
Walter made a motion to move forward with the table of permitted uses drafted on Dec. 15, and member Jim Carson seconded. The motion passed, with committee members Ray Gasperson and Wayne Horne voting against it.
The UDO committee will meet again in February to further discuss the table of permitted uses and the potential of a home occupation class.
For more information on the UDO, visit http://www.polknc.org/departments/development/unifieddevelopmentcommittee.php.
For a map showing the county’s current zoning districts, see this story on the Bulletin’s website, www.tryondailybulletin.com.