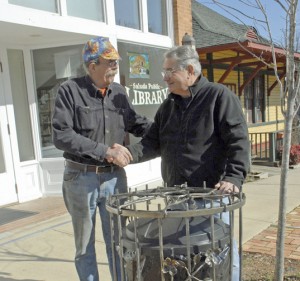 Local artist and blacksmith George Matthews receives a thank you handshake from Saluda Mayor Fred Baisden beside the new container Matthews created for Saluda. The City of Saluda received a grant through the Polk County Community Foundation to add to the growing number of recycle containers for the downtown area. The city commissioned local artists to design the containers. (photo by Carolyn Ashburn)