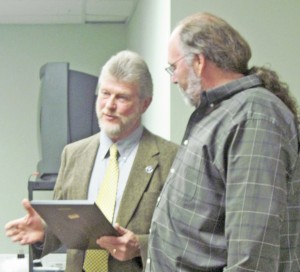 Mayor Robert Briggs talks to the group of residents at the city’s Jan. 10 council meeting about former city councilman Randy Wohnig’s service to the community. Wohnig served as a city councilman for six years, from 2005 to 2011. He originally joined the council to complete the term of a council member who had resigned. (photo by Samantha Hurst)