Landrum Depot work could start in late May 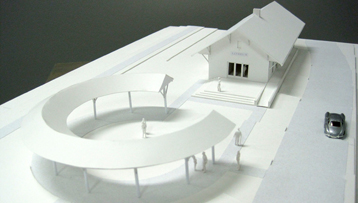 Model of the renovated Landrum Depot, created by architect John Walters. Walters told Landrum City Council construction could begin in late May if everything stays on schedule. (photo by Samantha Hurst)

Architect John Walters presented an update to Landrum City Council on the progress of renovation plans for the Landrum depot during a meeting Tuesday, Jan. 10.
Walters said if everything follows schedule, the construction phase on the depot could begin near the end of May, with the building set to be completed by the end of 2012.
Walters submitted revised drawings to the council Tuesday night and said he and city administrator Steve Wolochowicz will meet with the Landrum Design Review Board today, Jan. 12. He said the rest of the process should play out as follows:
• Completion of design and development phase by Feb. 7
• Final construction documents completed by April 10
• Project put out for bid April 17
• Bids returned for selection by the May 10 council meeting.
So far, Walters has done a walk-through with engineers, completed measured drawings and had a code meeting with Spartanburg County.
“The rest is a matter of refining the design,” Walters said.
Some of the design modifications have also been accomplished. Council asked that the planned stage and walkway canopy be pulled closer to the depot. That has been done and a removable awning for the stage has been added to plans.
The rear of the building, meanwhile, now includes steps and a ramp for an additional access point and Walters spoke of an addition of two small storage rooms and an additional restroom.
Councilman Jon Matheis said he would like to make sure the depot design includes a state-of-the-art multimedia setup that will take the town 10-15 years into the future.
The other sticking point on design plans is that of the interior ceiling. Walters created two options for the ceiling, one of which would be completely open with exposed ductwork and another in which the ductwork will be hidden.
Councilman Billy Inman and Don Smith said they both would like to see what the cost differences would be for various ceiling options before making a final decision.