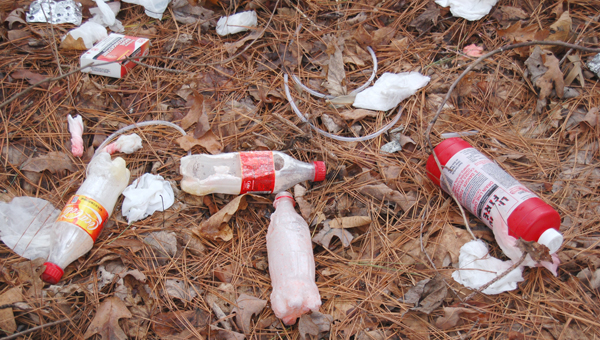 Polk tops state in number of meth labs this year

That discovery places the county at the top of the list for meth labs in the state so far for 2012. After going four years without a methamphetamine lab, Polk County has uncovered six sites in the last five months.

No arrests have yet been made in this case, but the investigation continues.

Polk’s narcotic investigator, who cannot be named, said he believes the same person created all three labs, because similar materials were used in all three. All were found within a quarter-mile of each other.

On Sunday, Jan. 8, a company discovered unusual items in the woods that could be seen from the road and contacted sheriff’s officers. Once the first lab was discovered, the other two labs were also uncovered by the sheriff’s office. The N.C. State Bureau of Investigation (SBI) assisted in processing the materials.

Investigators said they would classify the labs as small to medium, likely being used to make enough for personal use.

The sheriff’s office has handled a total of six meth lab locations, including the recent three labs since last August. A meth lab was found in a home in Sunny View in August and two were discovered in November; one in a Green Creek home and another in a home located in Lynn. No suspects have yet faced trial for charges.

“While it’s becoming more common, this has never been found in Polk County,” said Polk County Sheriff Donald Hill. “It’s much easier to make and much more portable.”

Officers said they believe the recently discovered labs were being used on private property by someone who did not own the property.

Investigators urge the public never to handle suspicious material, such as 2-liter or smaller plastic bottles that have a white substance or other chemicals in them. Tubing is also a common item used in meth labs. Officers said any time a bottle is found that has burn marks, it is likely a bottle being used to cook meth. The sheriff’s office urges area residents to contact the sheriff’s office at 828-894-3001 if suspicious materials are found on their property.

The process used in the recent meth lab sites involved plastic bottles with tubing and chemicals. Chemicals are mixed in a bottle and “cook” as they react with one another. There is a high risk of explosion because of the chemical reaction.

Investigators said one of the labs contained two boxes of Sudafed, which is the main ingredient in methamphetamine, while another contained one box of Sudafed.

Pharmacies across the country have laws in place that allow an individual to purchase only small amounts of Sudafed within a month because of the rise in the production of methamphetamine around the country.