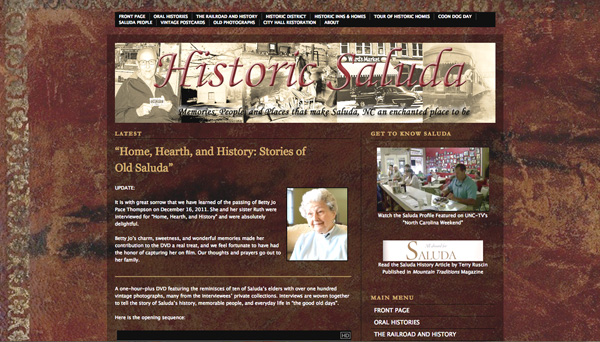 The home page of the website, located at www.historicsaluda.org.

Site features people, places of historic town
On Christmas Day, 2011, the Historic Saluda Committee launched its new website at www.historicsaluda.org.
The committee created the website to feature the people and places of historic Saluda, specifically the compilation of oral histories of Saluda’s citizens. Sales from the oral history film documentary, “Home, Hearth and History: Stories of Old Saluda,” released in the spring of 2011, helped to finance the creation of the website.
The website features film snippets from the DVD and never-before-seen footage of the interviews conducted during the making of the DVD. Since the oral history project is ongoing, more interviews have been conducted since the documentary was completed and these are being archived on the website, as well.
The site will also archive hundreds of old and new photographs, provide information about the progress on the restoration of Saluda City Hall, feature information about the annual Historic Tour of Homes and provide information about Saluda’s history, the railroad, historic homes and inns and pictures of Saluda’s people from the past and present. The committee said this is designed as a living website that will grow as the years go by while continuing to archive the information collected.
The DVD “Home, Hearth and History: Stories of Old Saluda” is now available for sale and can be purchased at local retailers in Saluda or on-line at the Saluda Mercantile at saludalifestyles.com or by accessing the website at historicsaluda.org.
The Historic Saluda Committee was formed by a group of concerned citizens who wished to preserve the historical integrity of the town. The grassroots effort spawned interest from Saluda City officials. In June 2010, the Saluda city commissioners voted to make the committee an advisory committee to the city and committee members were appointed.
Lynn Cass was appointed chair and Cindy Stephenson Tuttle was appointed co-chair. Other committee members include Gloria Testerman, Jack Coates, Martha Ashley, Charlene Pace and Greaton Sellers.
The first official meeting of the committee was held July 9, 2010. Major projects of the committee include the oral history project and restoration of Saluda City Hall. For more information email historicsaluda@gmail.com.
During the last Saluda Board of Commissioner’s meeting Cass talked about the Historic Saluda Committee’s excitement about having the website up and running.
“This all originated from the website Clark Thompson had before and donated to the Oral History Project,” Cass said. “We are so thankful to have something like this that will let people know about the rich history we have here in Saluda.”
– article submitted
by Cindy S. Tuttle 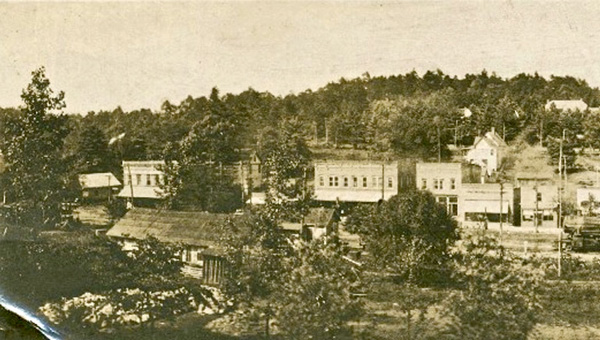 One of the historical photos of Saluda on the new website launched by the Historic Saluda Committee.