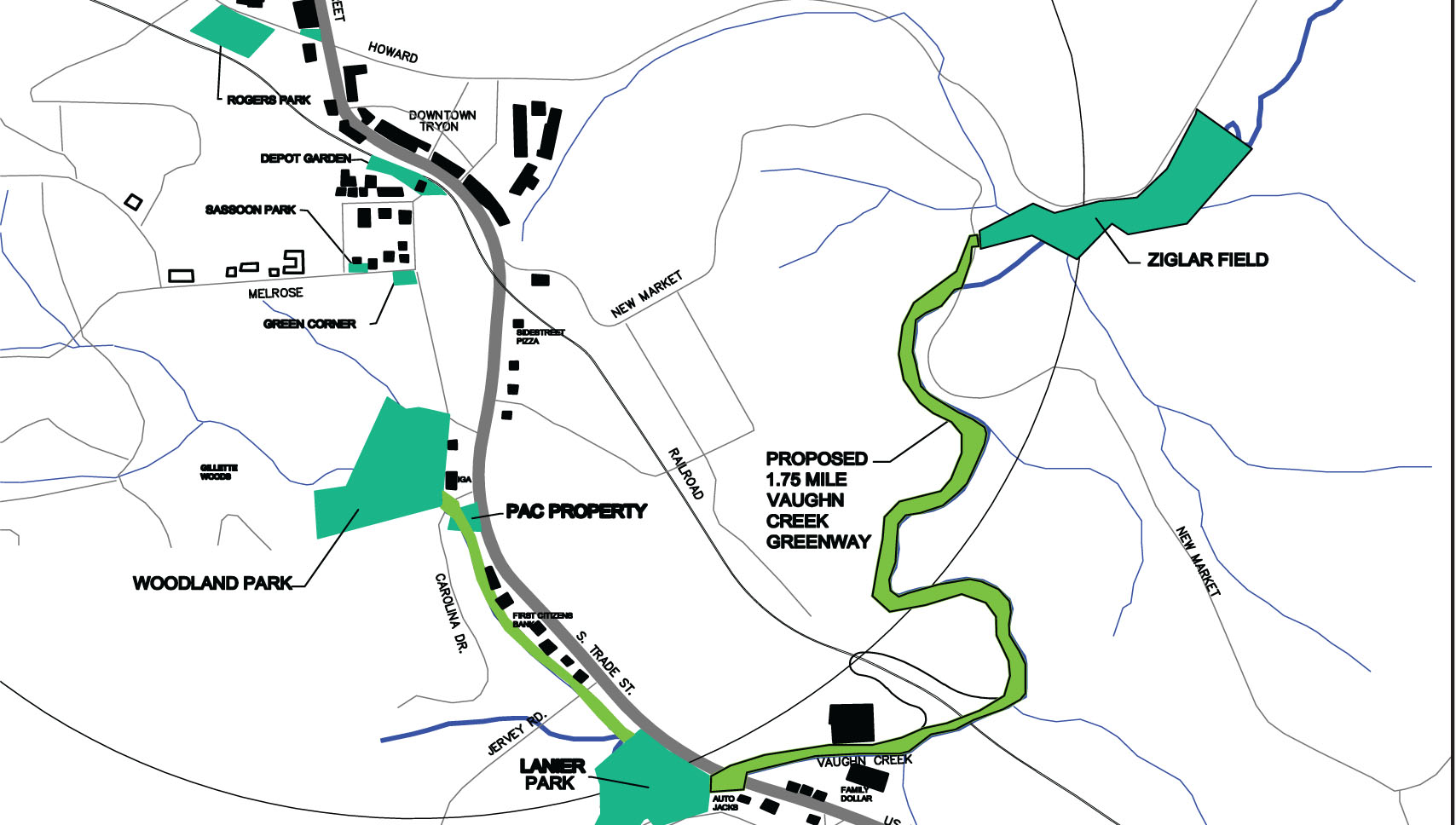 Map showing the Tryon-Greenways master plan. The Vaughn Creek Greenway is shown on the right below Ziglar Field.

Tryon Town Manager Justin Hembree and Tryon Mayor J. Alan Peoples recently jointly announced the acquisition of 24.72 acres of land on Vaughn Creek from Donald Lewis Smith and Robert Lewis. This effort had been a project of the Tryon Parks Committee since October 2005.
Funding for the project came from grants from the North Carolina Clean Water Management Trust Fund and the Marjorie M. & Lawrence R. Bradley Endowment Fund of Polk County Community Foundation. Tryon Mayor Peoples signed the transfer documents at Tryon Town Hall on Nov. 22, 2011.
The property, which contains an existing trail along the creek, is to be used as a permanent public greenway.
In addition, the Town of Tryon was also awarded a grant of $95,000 from the North Carolina Division of Water Resources that will permit improvements on the Vaughn Creek trail to begin in 2012.
The acquisition is the culmination of several years of planning and effort by the volunteers of the Tryon Parks Committee, with assistance from Jon Calabria, former member of the North Carolina Cooperative Extension Service Water Quality Group, and the Carolina Mountain Land Conservancy.
The proposed greenway will begin near the bridge over Vaughn Creek on New Market Road and end at the Norfolk Southern Railroad property behind the Old Mill Market Square complex.
Hembree said the new walking/running path will complement other facilities in the area and provide alternatives to other sites, like Harmon Field.
John Vining, chairman of the Tryon Parks Committee, said he remembers walking the trail as a kid. Vining said the property is an oasis in the woods. Walkers could get the feeling they were strolling along a mountain stream.
The path would run along the opposite side of the creek from all adjoining private property on Vaughn Creek.
The property is also valuable to the town since it is currently used as an existing sewer right-of-way.
Currently the Tryon Parks Committee is looking for volunteers who may wish to help with the improvements along the trail. There are several exotic plant species such as kudzu and privet that need removal. Anyone interested should send their name and email address to John Vining at john_vining@ncsu.edu.
– article submitted by Meg Rogers