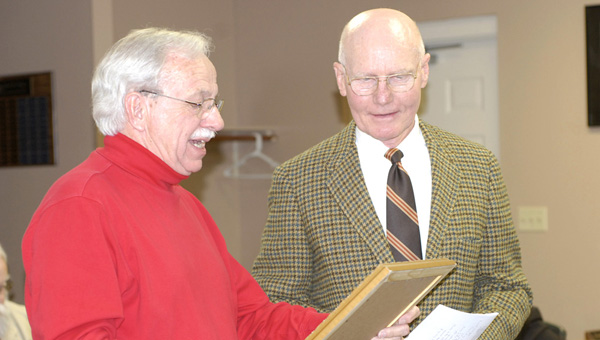 Tryon Mayor Alan Peoples presents a resolution to former Tryon councilman Austin Chapman thanking him for his service. Dec. 20 was Chapman’s last council meeting after serving since 2007, as he did not seek re-election this year. (photo by Leah Justice)

Editor’s note: Following is a resolution given to former Tryon councilman Austin Chapman, who had served the town since 2007. During the Dec. 20 council meeting, Chapman, who did not seek re-election this year, thanked council, town staff and residents for allowing him to serve.

WHEREAS, Austin Chapman attended Tryon High School, where he won all state honors in football; and

WHEREAS, Captain Austin E. Chapman attended the U.S. Naval Academy with the class of 1963 and served with distinction as a pilot in the United Stated Navy, flying 227 combat sorties in Vietnam (1965-1967), completing eight overseas deployments, commanding three aviation units, directing three major staffs, being awarded 11 individual medals and earning a listing in the Grand Club for naval aviators who have more than 1,000 carrier arrested landings during his 30 years of commissioned military service; and

WHEREAS, Austin Chapman has been a member of the Tryon Board of Commissioners since his election in November 2007, serving as the Mayor Pro Tempore for two of those years; and

WHEREAS, Austin Chapman, during his tenure on the Tryon Board of Commissioners, spearheaded a visioning and planning process for development of a comprehensive strategic plan through citizen and stakeholder input on strategic issues facing the Town over the next five years; and

WHEREAS, Austin Chapman was instrumental in development and implementation of that strategic plan through setting of goals, prioritization of Town activities and development of viable strategies to move the Town toward achieving those goals; and

WHEREAS, Austin Chapman served as Tryon’s representative on the Isothermal Planning and Development Commission (IPDC) board of directors and IPDC Transportation Advisory Committee; and

WHEREAS, Austin Chapman has completed his term as commissioner of the Town of Tryon; and

NOW, THEREFORE, BE IT RESOLVED:

That, I, J. Alan Peoples, Mayor of the Town of Tryon, North Carolina, take great pride in thanking Austin Chapman for a job well done in his dedication to making Tryon a better place to live, work and play.

AND BE IT FURTHER RESOLVED:

That the mayor, commissioners and Town of Tryon employees wish Austin Chapman great success in his activities outside of public elected office.