The ‘Do Something Good’ project 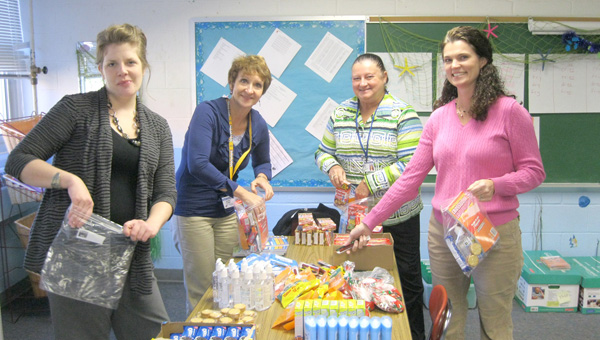 Polk Central Elementary School staff members Brooke Benfield, Robin Foster, Renae Calhoun and Angela Dufford pack gallon-sized bags with items for soldiers overseas. The staff members at Polk Central were broken up into teams and were given $40 to “Do Something Good” in the community. (photo submitted)

Polk Central Principal Dottie Kinlaw once thought $40 couldn’t go very far.
This year, however, staff showed her exactly how far it could stretch when the school gave eight teams of staff members $40 to “Do Something Good” in the community.
“It just amazed me how large they [the school’s staff] made what I thought was a small amount,” Kinlaw said. “We are blessed to be able to do this and really be able to celebrate the true Christmas spirit.”
Counselor Susan Howell said the school divided up the money it usually spends on a staff dinner among eight teams, which is how they came to the $40 amount.
“We never intended to get attention for it, we just wanted to do something that mattered this Christmas season,” Howell said. “I’m just amazed by how varied the projects were among the groups.”
One set of teachers and staff more than tripled their money by hosting a bake sale. After collecting $140 total, team seven stuffed 20 one-gallon Ziploc bags with crossword puzzles, beef jerky, shampoo and candy for soldiers overseas.
“I was surprised,” said Robin Foster of Polk Central, “that the need was so great for these treats to be sent to the soldiers.”
Teammate Renae Calhoun said her team could have chosen many projects but this one pricked their hearts most.
“The majority of us felt that this was the most important out of all the worthy causes we felt compelled to do,” Calhoun said. “Since we’ve done this project I know I’ve been much more aware of how fortunate we are to be here with our families when they cannot be.”
Team six felt drawn to do something for someone locally.
Speech therapist Julie Carroll said in the end a young boy and his family’s need grabbed their attention.
“There were so many places that we could have fulfilled a need but our group wanted to keep our project within our school family,” Carroll said.
So the team purchased items for the family of a first grader whose parents and three siblings are currently homeless.
“The project made me realize, especially in this community, there is a far greater need than we often know,” Carroll said.
Another team baked cakes for workers at the central office and the system’s bus garage and yet another team purchased 22 mattress covers for PATH homeless shelter.
Team eight even brought some of their students into the mix of the project. They, along with a group of fourth graders, dug their hands into a dog treat recipe and made batch after batch of cookies for the dogs at the Foothills Humane Society.
On Friday, Dec. 16 the staff did celebrate the season with a small drop-in reception where they all got the chance to view project boards with photos and typed stories about what each team did with its money.
“Our gifts to each other are the stories that we now get to share about our projects,” Howell said. “These gifts were so much better than anything we could have bought each other.” 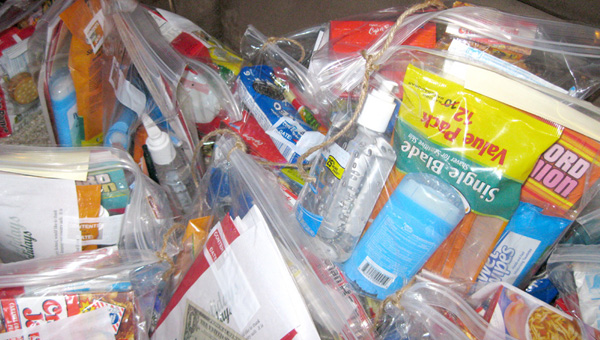 Some of the gallon bags filled by teachers at Polk Central for soldiers overseas as part of the ‘Do Something Good’ project. (photo by Samantha Hurst)