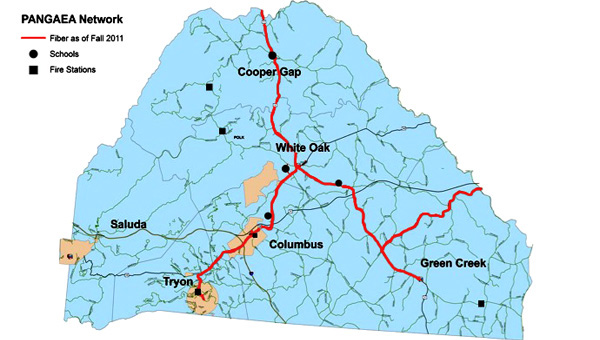 After beginning in 2003, the nonprofit PANGAEA now has 170 miles of fiber optic network in Polk and Rutherford counties and is connected regionally to Charlotte.

The Polk County Board of Commissioners met Monday, Dec. 5 and heard an update from Ron Walters, executive director of PANGAEA.

“[PANGAEA is] a hidden gem that is making a big impact. It’s important for people to understand what we’ve built here,” Walters said. “We now have a 170-mile fiber optic network in two counties.”

“Our fiber is near the Polk Industrial Park, Grover Industries and Woodland Mills,” Walters said. “There are all kinds of opportunities.”

PANGAEA has also provided bandwidth to the “construction city” for Facebook in Rutherford County as well as some employees’ homes who need the high-speed connectivity.

Walters said PANGAEA hopes to get the bandwidth to individual residential customers in the future but needs a partner to administer the service.

Walters said the connection has proved to be extremely reliable. He said service hasn’t been down in two years, and the network also has back-up equipment and power sources. Walters also said PANGAEA has a strong cash flow with $200,000 in reserves with customized pricing, economic development and job growth and the company uses local subcontractors.

“It is a community-owned nonprofit that is focused on the community, not shareholders,” Walter said.