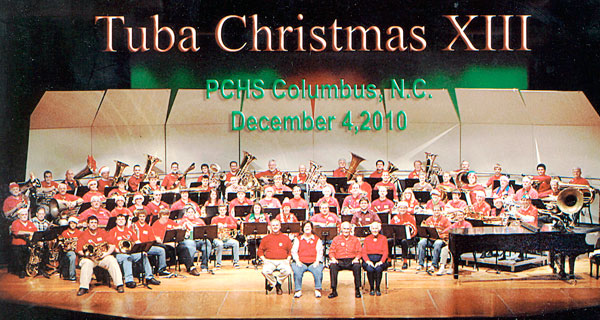 The 2010 group of performers for Tuba Christmas.

Musical tones of tubas and other low brass instruments played by musicians young and old will vibrate through the auditorium of Polk County High School Saturday, Dec. 3 as part of the Merry Tuba Christmas Concert and Carol Singing.
The concert begins at 1:30 p.m. in the school’s auditorium.
Founder Stan Howell said he always looks forward to seeing returning faces and new ones who find out about the event and drop in to play.
“It’s camaraderie for people who play these instruments, which is what he [Harvey Phillips, founder of the national event] wanted,” said Stan Howell. “He wanted to give them value – status.”
Serving as the bass of the brass section in most orchestras, tubas and euphoniums (tenor-voiced brass instruments) often don’t get a chance to show off their skills through solos, Howell and his wife, Jean, said.
“This gives these musicians a chance to shine,” Jean added.
Phillips created the concept of Tuba Christmas concerts in 1974 and since then similar events have sprung up in 250 cities nationwide. There are four such events in North Carolina alone.
Meanwhile, Stan Howell’s passion for bringing musicians together started decades ago when he created a band “in a school that had nothing.”
Then in the 1970s someone at the Howell’s church in Langhorne, Penn. asked Stan to put together a Christmas band. That band continues to perform today and at one point contained up to 70 members.
Jean’s musical career is distinguished as well. She was a choral director in Pennsylvania, including serving as director at Langhorne United Methodist Church for 21 years and the bell choir director for 18 years.
The Howells brought their love of music with them when they moved to Polk County in the late 90s.
“When we arrived in the community we wanted to do something with music that didn’t take rehearsal after rehearsal, but would allow us to give something special to residents,” Stan said.
Stan had played in Tuba Christmas events in the past in Athens, Ga., Naples, Fla. and Pennsylvania. So, in 1998 they founded the Merry Tuba Christmas concert and carol singing.
The event has drawn players from as far away as Pennsylvania and as near as the high school itself. The oldest tuba player gracing the stage last year was 86-year-old Ralph Morris and the youngest was 12-year-old Jordan Marcial from Advance, N.C.
The Howells said this has also become quite the family tradition for many people, with three Morgan family members from Canton, N.C. playing last year.
Each participating player leaves the event with a photo postcard of the group that year, full stomachs from the Rotary-sponsored lunch and hopefully fond memories of their experience, Jean said.
The Howells dream of eventually enticing 100 players to perform in a single concert. They’ve inched close each year; drawing about 70 to play. The local event started out with just 39 performers.
In all, the production costs about $3,000 to put on, which is offset by contributions from the community, including the Wilhelm Fund of the Polk County Community Foundation, and a $3 musician fee.
Each year’s group of musicians typically plays to about 700 audience members who get the pleasure of singing along with many of the carols, the Howells said. That 700 is just shy of a full house at PCHS – another feat organizers would love to accomplish.