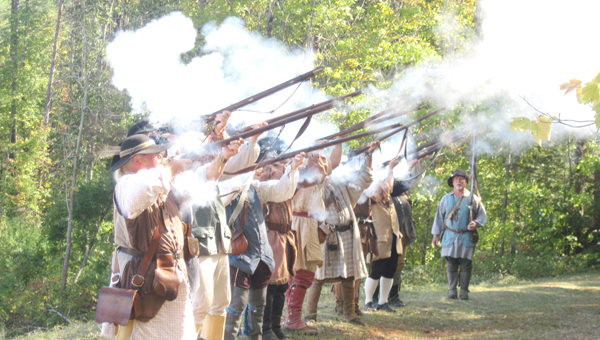 Reenactors fire muskets to mark the certification of Alexander’s Ford in Polk County as an official part of the Overmountain Victory National Historic Trail. (photo by Samantha Hurst)

Plumes of smoke rose from the just-fired muskets of reenactors Wednesday, Oct. 5 commemorating the certification of Alexander’s Ford in Polk County as an official part of the Overmountain Victory National Historic Trail.
Paul Carson, superintendent of the Overmountain Victory National Historic Trail, said he and local volunteers have worked since 2005 to have the 162-acres of Alexander’s Ford included.
“It feels great to finally recognize such a significant part of the Patriots’ journey to Kings Mountain… this was for many of the soldiers that went on to that battle the last place they would lay their heads down to rest on this earth,” Carson said.
In 1780 an all-volunteer mounted army trekked from Abingdon, Va., to Kings Mountain in South Carolina in an effort to push out British soldiers attempting to suppress dissent from the Patriots. Carson described the 330-mile journey across four states as wearisome on the soldiers, who ran scarce on provisions. The men prevailed, however, and defeated Major Patrick Ferguson and his 1,100-member Tory army after gathering word that Ferguson and his men had changed their course.
Kings Mountain was a turning point in the war and Alexander’s Ford was a turning point in the march, Carson said.
“It was a proud day for me because we had been working on it for so long,” said Ambrose Mills, chairperson of the Polk County effort. “We couldn’t ignore the history of this place.”
In 1980, President Jimmy Carter recognized the trail as the first national historic trail in the country. By 2002, just 16 miles were certified. This number had since grown to 78 and now to just over 80 with the addition of Alexander’s Ford.
Martha Love is chair of the Margorie M. and Lawrence R. Bradley Endowment Fund of Polk County at Polk County Community Foundation, which provided grants the county needed to purchase the site.  Love spoke at the ceremony of conservation easements that will help protect and preserve the area as a nature preserve.
Polk County Commissioner Ray Gasperson spoke of the certification event as a milestone in the effort.
“This is huge that this has been dedicated because now it will open the door for additional grants from the park service,” Gasperson said.
The National Park Service has awarded the county a $15,000 grant to create a master plan for the area. On Thursday, Oct. 6 the county signed a contract with Equinox Environmental out of Asheville to draft a site plan.
“We have a lot of easements to protect it,” Mills said. “With no structures to be placed beyond the first 1,200 feet.”
There would also be a need to seek additional funds for archeological studies to identify areas that could include valuable links to the area’s history. Carson said this would be an imperative part of the process because no digging or construction can be done until the areas are marked off. Once these pieces are complete, Mills said, plans for the nature preserve include a short biking trail, an open picnic shelter and hiking trails winding through the property. Mills said the county anticipates a portion of the project to be open to the public by June of next year.
Carson said the National Park Service could also underwrite projects for signage and special events such as the educational program held for students earlier on Oct. 5.
“If you’re a kid, a fourth or fifth grader, imagine how much of a different learning experience it would be to come out here and walk the path where soldiers walked versus reading about it in a book,” Carson said.
Alan Bowen, president of the Overmountain Victory Trail Association (OVTA), led 380 Polk County students on an excursion through Alexander’s Ford.
“Our goal is to get kids on the trail and hiking, plus expose them to history,” Bowen said. “As we walk along the trail the student cross paths with our reenactors who relay a portion of the story about these courageous men.”
He said the parents observing the educational programs also see the trail’s significance and that only furthers the preservation effort.
“We had several adult chaperones with the kids here earlier today that said, ‘You know I’ve lived here my whole life and didn’t even know what I was looking at when I came by here,’” Bowen said.
Two property owners came by interested in having their property certified as part of the trail as well, he said.
“It literally took an act of Congress to get this started,” Bowen said. “We’ve got a long way to go but we’ve made a lot of headway.”
The OVTA plans to return with reenactors on Oct. 5, 2012 to give additional educational programs to local students and community members as they continue their almost four-decade effort to honor the 330-mile trek to King’s Mountain. 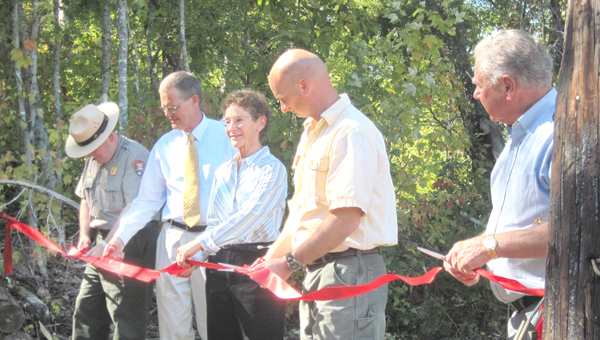