Trees to be planted along Hwy. 108 to beautify entrance to Columbus 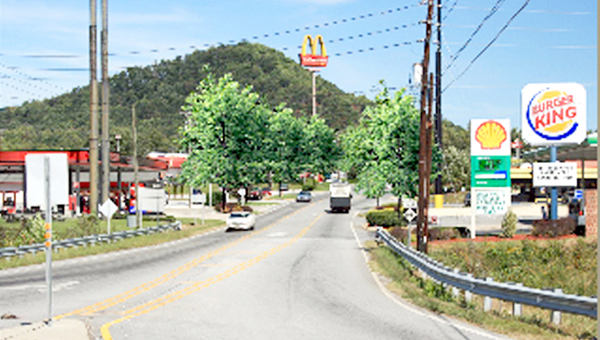 A computer enhanced image of what the entrance to Columbus from the west could look like according to the Polk County Appearance Commission’s designs. The commission recently received funding from the Polk County Community Foundation to begin planting trees and do other landscaping along the county’s entrances. (photos submitted)

A partnership between the Polk County Appearance Commission, the Town of Columbus, the N.C. Department of Transportation (DOT) and the Polk County Community Foundation (PCCF) should result in a noticeable improvement to the entrance of Columbus soon.
Columbus Town Manager Jonathan Kanipe announced at the town’s Sept. 15 meeting that the Mills Street beautification project should go out to bid in November, with the tree planting expected to be done in December or January.
Polk County’s Gateway Tree Planting Project was first envisioned by the Polk County Appearance Commission last year to improve the aesthetics of the entrances of Polk County.
The Mills Street project will include planting more than 40 trees from I-26 to Walker Street, along the town’s I-26 business corridor. The species of trees include 16 maples, eight cherry trees and 18 oaks.
The PCCF awarded the town a $10,000 grant for the project, along with funding also being given by the DOT for the purchase of trees.
“I am very pleased with the project,” said appearance commission chair Joe Cooper. “The good news is the partnership with the Town of Columbus, the county’s appearance commission, the DOT and the community foundation.”
The trees will be planted along rights of way owned by the state in front of businesses and will be mature trees, Kanipe said.
The appearance commission, Saluda and the DOT also recently completed a beautification project in Saluda. The appearance commission presented a certificate this summer to the DOT in appreciation for partnering with Saluda to accomplish that project.
Cooper said next the appearance commission is hoping to improve the entrances to Tryon, including coming from Columbus and at the state line. Cooper said the most important to the commission is the state line entrance, as it is a gateway into North Carolina. No funding has yet been awarded for the Tryon project.
The appearance commission’s Cooper and Mark Byington presented the initial project to county commissioners last year. Byington, who is a landscape architect with Innocenti-Webel created the drawings for the project.
The total enhancement project includes plantings and trees coming off the U.S. 74 exit in Columbus and the entrances into Tryon. Byington and Cooper presented before and after pictures and drawings to commissioners last year to show what the county’s entrances could look like. The appearance commission at the time also said they were looking into ideas to work with property owners, especially larger stores, to do plantings within parking lots.
Byington said it’s not just about the appearance, but other benefits, including reducing storm water runoff, improved water quality, increasing groundwater recharge, slowing traffic and reducing air pollution. The plantings will also help improve economic stability by attracting businesses and tourists, Byington told commissioners.