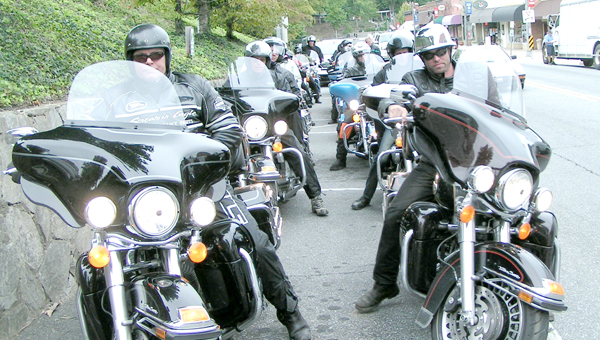 Bikers from Norway took a break in Tryon while on a tour of the East Coast. (photo by Carol Boissier)

The roaring engines and gleaming metal of Harleys appear commonplace on most weekends around the Thermal Belt, especially as the lure of changing leaves draws people into the mountains.
There was something unique, however, about the pack of bikers that rolled through downtown Tryon Friday, Sept. 16.
The 25 men and women touring the area were visiting all the way from Norway.
“We were told the Blue Ridge Parkway through the mountains was a very scenic route,” said tour leader Magnus Ellingsen. “This is our first tour of the East Coast.”
Ellingsen’s company, Two Lane Adventure of Norway, brings regular groups of bikers to the states for trips that traverse thousands of miles and weeks of travel. Two Lane Adventure has organized trips for more than 1,000 people since 1999, according to the website.
Ellingsen checked his odometer to find 1,953 miles added to his wheels since leaving the New England states.
Renting the bikes in New York, the riders traveled to Buffalo, N.Y., before making their way to the Blue Ridge Parkway down through Virginia and into North Carolina.
“It’s beautiful country,” said one biker named Mortem.
Apparently the weather had been favorable as well.
“This is the first time on the trip we’ve had to put on our jackets,” Ellingsen said of the weather Friday.
The group, perched on the backs of 16 bikes, parked just in front of the Tryon clock tower as they grabbed a bite to eat at Elmo’s.
Shortly after lunch the leather wearing crew jumped back on their bikes and headed south to the South Carolina line. Ellingsen said they’d travel to Charleston next before making their way down to the Florida Keys via the old scenic byway of Route 1.
The group’s entire trip navigates 3,000 miles up and down the east coast.
Foothills Chamber of Commerce Director Janet Sciacca, who happens to be a bike enthusiast herself, said bikers are drawn to our area and that’s a good thing.
“It’s the mountains and the curvy roads that the bikers like and that’s great for bringing people into Polk County and Landrum,” Sciacca said. “If you ride a motorcycle and you live in South Carolina, Hwy. 176 and Highway 9 are two extremely popular rides with bikers, and so all those shops along the way see a lot of business from those that come through.”
– Bulletin intern Carol Boissier contributed to this article.