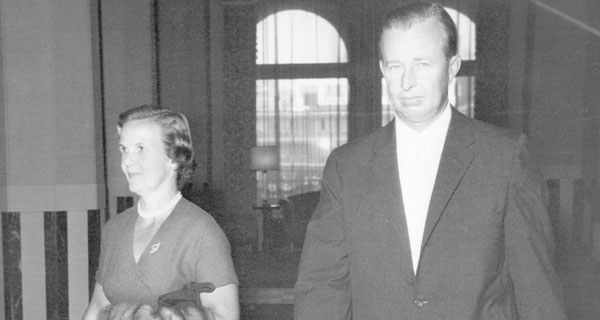 Margaret and Stuart Forbes attend a formal function. (photo from the files of the Polk County Community Foundation)

The Thermal Belt lost a major contributor to local educational and community organizations with the death of Margaret Louise Forbes on Aug. 12, but her legacy will live on.

It will live on in all the children who begin their educational experiences at Forbes Preschool, in every student who receives scholarship help for college through Forbes’ foundation and in the area’s teachers and school administrators who continue to benefit from Forbes’ many efforts in support of education.

“Forbes’ vision and contribution to Polk Schools was immeasurable,” said Polk Schools Superintendent Bill Miller. “Her commitment to quality early childhood education resulted in Polk having preschools in every school in this system long before anyone else was even talking about the importance of preschool.”

Forbes, who was 96 at the time of her death, lived in Polk County for more than 40 years. She was born on May 9, 1915 in Flint, Mich., and graduated from the University of Michigan in 1938, the same year she married her high school sweetheart, Stuart Forbes.

The couple retired to Polk County in the 1970s, and Margaret became active in the St. Luke’s Hospital Auxiliary, the Green Blades Garden Club, the Congregational Church in Tryon and Jackson’s Grove Methodist Church.

Following Stuart’s death in 1985 after a battle with cancer, Margaret founded the Stuart and Margaret L. Forbes Scholarship Program at the Polk County Community Foundation. She became increasingly interested in enriching children’s lives and the quality of their education. In 1995, she purchased and donated the Duke Power building in Tryon to the school system to create the Forbes Preschool Center, a full-day preschool for four-year-olds at little or no cost to parents. The school served as an impetus for establishing preschool programs at every elementary school in North Carolina.

At the dedication of the Forbes Preschool, Governor James B. Hunt said, “Mrs. Forbes has made a wonderful commitment to children. We should commit ourselves as a people to help every child start school healthy and ready to learn.”

In June 2010, the first students to enroll at the Forbes Preschool Center graduated from Polk County High School. Former student Mae Wolfe said, “The Forbes Education Center is a wonderful way to invest in the future. We all, as citizens of Polk County, benefit from the far-reaching effects.”

Elizabeth Nager, president and CEO of the Polk County Community Foundation, has personal memories of Forbes.

“Margaret Louise Forbes loved children,” she said. “I remember meeting Margaret years ago when my son Bryson attended Forbes Preschool. She loved visiting the children who welcomed her with hugs because of her obvious enjoyment of them and because she did not tower over them like most adults.”

The next milestone in Forbes’ quest to improve educational opportunities for area youth came in 1998, when she formed the Stuart and Margaret L. Forbes Foundation, which has distributed more than $400,000 in scholarships to high school students and grants to local organizations.

“We, as individuals, have only to look at the stellar example of generosity set by Margaret Forbes to learn an important life lesson about selfless giving,” said Jim Boyle, current president of the Forbes foundation. “Margaret did not seek recognition for her gifting, she simply wanted to do her part in making the lives of others better – to make a difference – and in this she excelled.”

Administered through the Polk County Community Foundation, the Forbes foundation has also made significant contributions at the elementary and middle school levels through partnerships with the school system. The foundation worked with the school administration to offer the SOS after school program and to obtain the QZAB grant that allowed for renovations at Tryon Elementary School.

“Margaret sparkled with excitement when she learned about the bright young adults helped by the Stuart and Margaret L. Forbes Scholarship Program at the Polk County Community Foundation,” Nager said. “She was always interested in who had received the initial award and who had qualified to renew the scholarship. She took great pleasure in helping students of all ages succeed.”

In support of teachers, Forbes also endowed a scholarship fund at the N.C. Center for the Advancement of Teaching, which provides an annual week of training for the Polk County teacher of the year.

Forbes received numerous honors in recognition of her service to the community. In 2003, N.C. Governor Michael F. Easley presented her with the Order of the Long Leaf Pine, among North Carolina’s most prestigious awards, which recognizes “special confidence in the integrity, learning, and zeal” of its recipients, which have included Maya Angelou, Billy Graham, Michael Jordan and Charles Kuralt.

“Margaret gave all of us in Polk Schools an uplifting example and the message that what we’re doing is important. She had no children in the local school system but still placed such a high value on education that she gave enormous amounts of time and money to support it. Her belief in our mission was an inspiration to all of us.”

A memorial service for Forbes will be held Friday, Aug. 19 at 11 a.m. in the Congregational Church on Melrose Avenue in Tryon.