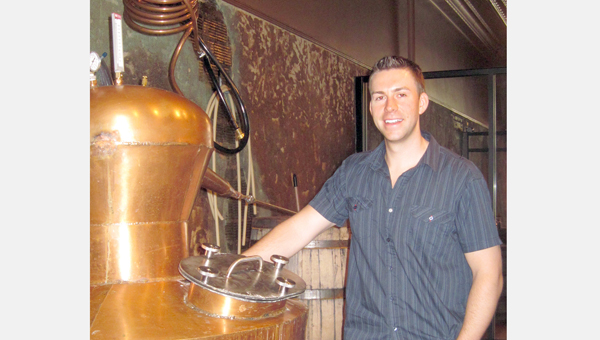 Joe Fenten stands beside the handcrafted copper still made for Dark Corner Distillery in the tradition of Upstate moonshiners. Fenten and business partner, Richard Wenger, pored over historic photos to get the right design. (photo by Samantha Hurst)

Polk native opening first legal moonshine micro-distillery in South Carolina
Foothills native Joe Fenten and business partner Richard Wenger are just weeks away from opening Dark Corner Distillery in downtown Greenville.
Inside the distillery’s historic 1920s building, they’ll make corn whiskey in the tradition of Upstate moonshiners, only legally.
Fenten knows all about the history of moonshiners in this area. He grew up in the middle of a peach orchard right at the foot of Hogback Mountain. It was there he found himself first intrigued by the Dark Corner and the illegal whiskey men lived and died to make.
“Growing up you’d see a clear jar on a table and ask what it was. Immediately someone would tell you, ‘Aw, that’s just water.’ But even as kids we knew better. So you can see why there’s always been a mystique to moonshine,” Fenten said.
Fenten, who along with his wife, Roxanne, graduated from Polk County High School, jokes that his classmates might be surprised by the theme of his new business. He said he was definitely not a partier in high school. He didn’t have his first drink until he was 21, he said, and didn’t take a sip of his first beer until last year.
But Fenten said he felt a sense of pride in the idea of crafting something of real quality and history.
“The spirit of the distiller is involved in the whiskey,” Fenten said. “All of our heritage is there in the Dark Corner and there are still a lot of good people there. That history goes a lot deeper than people getting drunk. Those were hard times and families could make a lot more money off a pint of whiskey than they could a bushel of corn.”
Plus Wenger, who is a close friend of Fenten’s, has homebrewed beer for more than a decade.
When South Carolina passed legislation in 2009 lessening the hefty fees required of micro distilleries, Fenten and Wenger were working an engineering job in New York. The two began throwing around the idea of opening a micro distillery over dinner and immediately went back to their hotel rooms to hash out a business plan.
They got serious about their plan in July 2010 and just a year later find themselves weeks away from opening their new venture.
“You want to get out and do something for yourself, but then again you want to be a part of this effort to support local businesses,” Fenten said. “We’ve found a way to do both.”
Part of crafting this business involved hand-sketching a design for the whiskey still itself. Fenten and Wenger pored over historic photos of actual moonshine stills to get the look and design as close to the traditional method as possible. A company in Spartanburg then fashioned the still out of copper and connected it to an oak barrel.
While the typical industry-standard still can hold about 150 gallons, Dark Corner Distillery’s setup only works with 80 gallons at a time. This is just the way Fenten and Wenger want it, though. Fenten said the two are after quality before they try overflowing shelves with huge amounts of their whiskey.
Another key step in the process was getting the recipe just right.
To call a product corn whiskey it must contain 80 percent corn. The other 20 percent can be made up of other grains, such as the red wheat, malted barley and rye Fenten and Wenger plan to use.
“When moonshine is made right it’s very smooth and you should be able to taste those local grains,” Fenten said.
For Dark Corner Distillery that means tasting the nuances of grains grown right in South Carolina – Suber Mill in Greer and  Haygood Mill in Pickens, two of the oldest mills in South Carolina, will provide white corn and white cornmeal.
Once the distillery is open, visitors will be able to witness the entire process from start to finish – doughing in grains, churning the mash and pitching the yeast.
Dark Corner Distillery plans to sell its moonshine at 100 proof, though they’ve made batches up to 115 proof. Fenten said customers wouldn’t find neutral grain spirits (vodka or gin), which are high in alcohol content but lacking in flavor, in this distillery.
“We don’t want to water down our product,” Fenten said. “We want it to be flavorful and robust.”
Moonshine got its name from its makers’ necessity to cook it under the light of the moon so law enforcement wouldn’t see smoke from the smoldering fires.
Since this distillery’s product is legal, there won’t be a need for hidden copper pots tucked into the woods.
Instead, Fenten and Wenger have blended this old hill tradition with the modern life setting of Main Street America but in a building originally constructed in 1925.
Inside what used to be a local radio station and O’Neal Williams Sporting Goods, the business partners have transformed a blank store space to resemble a cave-like dark corner. The walls inside the distillery are covered with a rough textured paint effect and exposed brick that glisten in the light just as one imagines a back corner of a mountain area would look like.
The front half of the distillery, meanwhile, has tables set up on overturned oak barrels. In this section, the distillery will display a variety of local mountain crafts made from materials of the Upstate such as jewelry, cutting boards and stained glass, as well as a variety of foods such as honey and moonshine infused items like peach salsa.
For more information about Dark Corner Distrillery and updates on its opening, visit www.darkcornerdistillery.com.