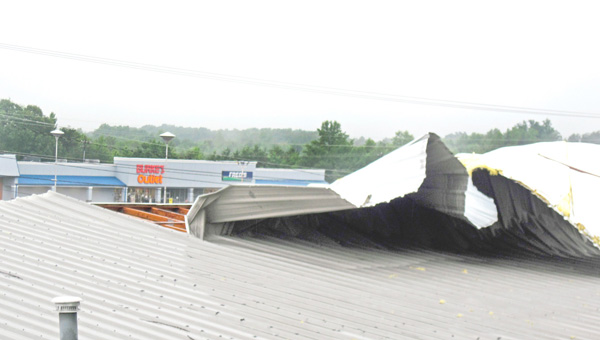 The roof of the Landrum Drug Company building on Hwy. 14 after strong winds peeled back a large portion of the metal roofing Thursday, May 26. (photo by Samantha Hurst)

Strong winds peeled back a portion of the roof on the Landrum Drug Company building Thursday, May 27, causing ceiling tiles and insulation to fall into the building and allowing rain to fall on the merchandise and equipment in the store.
The winds were part of a strong storm system that moved northeast from Georgia through the Carolinas Thursday night, accompanied in some areas by large hail and heavy rain.
Area emergency crews were kept busy through Thursday night, dealing with fallen trees, downed power lines and power outages. Many area residents were still without power Friday  morning.
Landrum Drug owner Dennis Burdette, who lives in Duncan, S.C., said he found out about the damage to his store around 9 p.m. Thursday.
“It just ripped my roof off,” Burdette said.
Twelve hours later, at 9 a.m. Friday morning, ServiceMaster crews worked inside the building, covering items with tarps and throwing away debris.
Landrum Drug has been in its current location off Highway 14 for the past 25 years. Burdette purchased the company 12 years ago. Charles King owns the building.
Thursday night’s violent weather did damage across the Eastern seaboard, causing flooding in many towns and killing at least three people in the Atlanta area.

Sheriff sweeping pills out of Polk