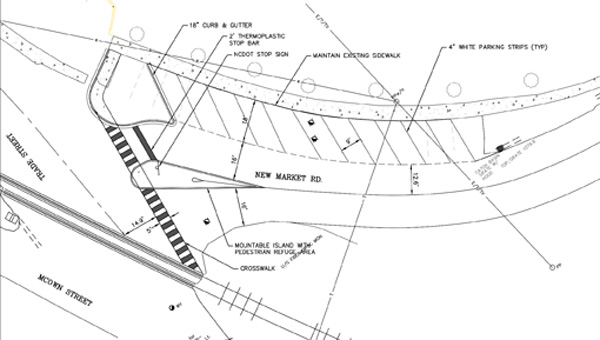 Architect’s drawing of changes proposed at the intersection of New Market Road and Trade Street in Tryon for the third phase of Streetscape.

Tryon Town Council has approved the preliminary design for the town’s Streetscape III project, which will include work along the South Trade Street/New Market Road intersection.
Tryon Town Council met Tuesday, April 19 and approved the design unanimously.
The town has budgeted $12,000 for the streetscape plan this fiscal year, as well as $2,000 from the Tryon Downtown Development Association (TDDA) and a $15,000 grant from the Polk County Community Foundation (PCCF) Unrestricted Fund.
Tryon Town Manager Justin Hembree told council that the South Trade and New Market section was selected as the first to be constructed because of its minimal construction costs and high visibility.
The design includes the N.C. Department of Transportation (DOT) straightening the intersection of the two roads, placing a crosswalk and an area for plantings as well as a bump out.
Hembree said the DOT wants to make the intersection more of a 90-degree angle.
A pedestrian bump-out is planned for South Trade and Oak Street, as well as sidewalks and landscaping, according to the design.
Other work includes drainage improvement, which will take place underground, Hembree said.
Also in the plans is making McCown Street one-way. Since McCown Street is town-owned, Hembree said the town will decide which side of the street parking will be and how it will be configured.
Hembree said the draft design has been submitted to the DOT and Norfolk Southern. He said the town has not yet received comments and both are going through their formal processes now.
Other action will be needed from council once the design is approved and construction is ready to begin. No estimates have been given as to when construction is expected.
Improvements that have been completed in downtown Tryon over the past decade have included new sidewalks, street and traffic lights.
For more information on the town’s Streetscape master plan and information about downtown Tryon, visit www.downtowntryon.org.