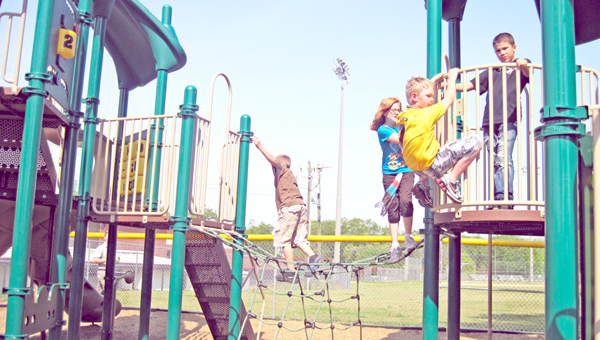 Greg Tolbert, director of the Boys and Girls Clubs of Upstate, presented information to the Landrum City Council April 12 about a $628,125 investment in Landrum kids over the next four years.
The initial funds were garnered last summer through a 21st Century Community Learning Centers grant from the Department of Education. Funds from the grant created the Boys and Girls Club program at O.P. Earle Elementary, which is currently in the middle of grant year one.
“We’re touching 100 kids at Landrum – that’s 100 kids that never had anything like this before,” Tolbert said. “That’s a big win for Landrum.”
Boys and Girls Club board member Ellen Gramling said the program protects kids and helps them reach new potential.
“Children are safer at school until 6 p.m. than they are wondering around in places they probably don’t need to be,” she said.
Tolbert backed up Gramling’s statement, providing information about exactly who is watching many students after the school bus drops them off at home.
Program administrators surveyed 500 parents last year with kids in all of the Upstate clubs. They specifically asked these parents where their kids would be after school if it weren’t for the Boys and Girls Club.
Tolbert said only 31 percent of those who responded said they would be home with a parent. Of the 900 kids surveyed, 50 percent said they’d be home with other kids – siblings or youth babysitters. Many of the rest would be under the supervision of an other family member.
“What we do know is that afterschool time is a perplexing time for families… what do you do… it’s a national problem,” Tolbert said. “When you put a 5, 6 or 7-year-old boy or girl in the mix with unsupervised 16- and 17-year-olds, the worst case you get molestation and sexual abuse, best case they’re watching MTV.”
Tolbert said Boys and Girls Clubs aim to combat this problem by focusing the children’s attention on education, character building and physical fitness during the hours of 3-6 p.m.
O.P. Earle Unit Director Trevin Taber keeps his kids on task.
“The parents always say, ‘I’m so glad you get them settled down before you send them home,’” Taber said. “We work hard to make sure they take care of their homework and get to be kids running around outside.”
Taber packs in a lot of activities for the kids under his care each afternoon. He currently runs five homework classes.
In fact 50 percent of attendees’ time is focused on education with the students attempting to complete homework. During this portion of the day is when Tolbert said the club needs the most community support. He and Taber would like to see a volunteer for each class to assist students as they work through challenging homework assignments. These volunteers would provide tutoring in math, English and computer science, as well as other subjects the kids might struggle to understand.
Another portion of the day – three 45-minute sessions a week – involves working with computer programs that help sharpen the kids’ skills for standardized tests such as the MAP test.
Then there are sessions on life skills (hygiene, drug and gang prevention), art (the club offers piano lessons, creative writing, photography and theater) and recreation, which can include basketball, volleyball and Triple Three, a specific fitness program designed by the Boys and Girls Club.
“You’re not watching TV and laying on the sofa at Boys & Girls Club,” Tolbert said.
Some down time is built in for kids to play video games or for individual play, if they wish, but it’s limited to 45 minutes a week.
Tolbert said the club’s next goal is to engage the community through the kids.
“We want to go around, show kids the various businesses and just let the kids experience that, have fun with it and learn about it,” Tolbert said. “It will show the kids a future they’ve never even thought about and show businesses a way in which they can invest in our future.”
The future of the Boys and Girls Club in Landrum will eventually depend increasingly on community support, Tolbert said.
Grant funds will step down in years three and four, leaving a gap of $46,875 in year three and $75,000 in year four for the organization and community to provide. Base club operations will cost $100,00 annually. Each district committed to provide $50,000 each year beyond the grant.
Tolbert said there is no reason why they couldn’t serve 150 kids a day in the O.P. Earle program eventually. But maintaining the success of the current program is the organization’s goal.
“What we don’t want to do in four years is close that club back up and shrink back to Spartanburg,” Tolbert said. “You’ve got great schools, but you’ve got a lot of poor kids and they need Boys and Girls Club programs after school. It’s magic what we do at these schools.”
The Boys and Girls Club in Landrum is always in need of volunteers, Tolbert said. To find out more about volunteering or making a donation to the program, call 864-583-4867.