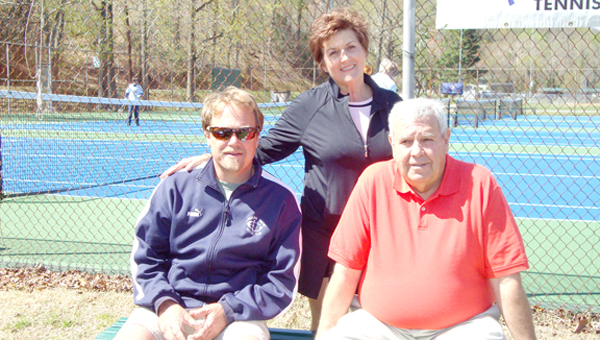 The Thermal Belt Community Tennis Association (TBCTA) dedicated new tennis courts, nets and benches at Harmon Field Saturday, April 2.
“The feedback has been excellent,” said parks and rec supervisor George Alley. “The community seems pleased with it and there certainly are a lot more organized events going on here including USTA adult and junior league being held now.”
The new flex surface for the tennis courts boasts a 20-year estimated life span. The Harmon Field Board of Supervisors began discussing the need for repairs or replacement of the tennis courts years ago, but funding held back efforts.
Alley said the flex courts cost $59,000. The Polk County Community Foundation granted $18,000 for the project, while $2,000 came from the Thermal Belt Tennis Association, $2,000 from Friends of Harmon Field and $6,000 in other donations. A surprising anonymous donation in the amount of $31,000 for the courts and open air gym fulfilled the last portion of funds needed for the project.
“We had a variety of smaller private donations, which was great, and essentially an anonymous donor took care of the last half of the money we needed,” Alley said. “It means a lot. It seems to me a good formula to have everyone throw in a bit. It’s nice that people in town stepped forward to do that.”
Alley said the tennis association “put on a real nice show for the day including a tennis clinic” to dedicate the courts.
Thermal Belt Community Tennis Association president Darlene McFarland said the group was thrilled to dedicate the new courts and get back to swinging their rackets at Harmon Field.
“We had a beautiful day to play tennis and enjoyed the ‘Quick Start’ clinics for youth as well as open play for adults,” McFarland said. “Our members are especially thrilled about the flex courts, because they are so much easier on your body.”
TBCTA plans to host another clinic for players of all levels, Thursday, April 28.