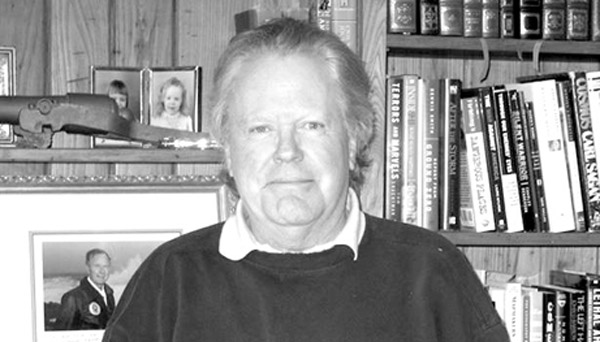 Local author and historian Paul Reid will discuss his work on the completion of William Manchester’s third and final volume of his Winston Churchill biography, “The Last Lion: Defender of the Realm” at the Lanier Library on Tuesday, March 15 at noon.
William Manchester died in 2004 at the age of 82, before being able to complete the final volume of this highly acclaimed biography but, shortly before he died he asked Paul Reid to complete it for him.
Early in the process of completing Manchester’s work, Reid described his experience as follows: “Bill’s notes and interviews run to thousands of pages, enough to fuel at least three more volumes. My job, therefore, is to pace this final volume. Having been guided by Bill the last year of his life, and having in hand the pages he wrote (to the Fall of France) I think I have a good feeling for the pace he set and where he was going. The pages Bill finished are, as was usual with Manchester, marvelous, full of suspense and foreshadowing, a real tale beautifully told. Among many things he made clear to me was his desire that this book be an enjoyable read for younger people, those under 40 years of age who did not grow up with stories of World War II percolating through their household.”
In a Nov. 7, 2010 article by Pam Kelly in the Charlotte Observer, Reid was described as “The most highly anticipated author you’ve never heard of.”
Here are additional excerpts from that article: “Paul Reid is a former Florida newspaper reporter who moved to the N.C. mountains a few years ago. Since 2004, Reid has been writing the third and final volume of ‘The Last Lion,’ the late William Manchester’s majestic biography of British statesman Winston Churchill.
“Reid, 61, seems at first glance an improbable choice to write an 800-plus page biography. He was neither a Churchill scholar nor a biographer. As a feature writer at the Palm Beach Post, his pieces seldom ran more than a few thousand words.
“‘We started hearing these stories about this guy, and nobody knew him,’ says Craig Horn of Weddington, chair of the Churchill Society of North Carolina. ‘He was certainly not known in Churchill circles.’
“Reid lacked Churchillian credentials, but Manchester, a former newspaperman himself, wanted a writer with a reporting background. And he trusted Reid.
“Reid had written several feature stories about Manchester, and over the years, the two became friends. Both had grown up in Massachusetts and shared a passion for the Boston Red Sox. Manchester reminded Reid of his late father – a Scots-Irish Yankee with a big heart.
“And though Reid had never attempted a writing task of this magnitude, the subject of Churchill during World War II played perfectly to his strengths.”
Kelly said Churchill devotees and Manchester fans regularly contact Reid, some from as far away as England and Pakistan, to ask about his progress.
Their wait is nearing an end. The manuscript is in the hands of Reid’s editor at Little, Brown and Co., and the printed book is expected to be released within the next year.
To hear more of this great story of friendship and collaboration and its productive outcome, meet Paul Reid and hear him talk at the Lanier Library at noon on March 15. The program is free and everyone is invited.

Horse owners as young as 9 have the opportunity Tuesday, March 15 to vote for or against the continuation of... read more