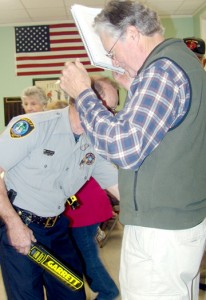 The county commissioners also this year decided to begin their second meeting of the month at 3 p.m., in an attempt to draw different residents. The county’s next meeting on March 21 will be held at 3 p.m. at the Womack building in Columbus, in the commissioners’ regular meeting room.
The Green Creek meeting was also the first that commissioners instated security measures. Residents entered the Green Creek Fire Department through a metal detector. Two Polk County Sheriff’s Officers attended the meeting and handled security. The county will pay the officers approximately $85 per meeting.