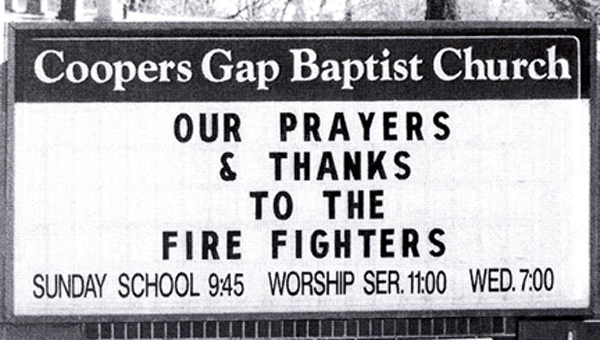 Fire chief gives county update  on 10-day fire
Sunny View Fire and Rescue Chief Marty McGuinn gave county commissioners an update Monday, March 7 on the recent Jude’s Gap fire. He said thanks to the community, the fire department spent less than $1,000 fighting the fire.
The Jude’s Gap fire began on Saturday, Feb. 12 and was contained on Feb. 22 after burning 1,477 acres in Polk and Rutherford counties.
McGuinn said with 22 personnel on the fire line from his department, approximately 1,000 man-hours were spent on the fire over its duration. He said many people and businesses from the community reached out to help the department.
“Feeding the troops became a big priority by Saturday night,” said McGuinn. “The (N.C.) Forest Service was self-sufficient, but we had to feed our people. Late Saturday night, I started getting phone calls from people wanting to feed us from the community.”
McGuinn mentioned many in the community who helped, including Harry Denton, who allowed the fire department to use a house he owns at Jude’s Gap as its command center. Also mentioned were  Marshall and Wanda McGuinn, Crystal Pierce, Paul Ruff, Kim Ruff, Patricia Garcia, John and Pam Laughter, Big Level and Cooper’s Gap Baptist churches, Ingles of Lake Lure, Wolverine Pizza, Danny and Rita Ruff, Pavillon International and Sunny Mountain Restaurant/McGuinn’s Exxon, among others.
McGuinn said fighting the fire would have cost much more money if the community hadn’t reached out to help. North Carolina’s expenses for the fire were approximately $300,000, according to McGuinn.
McGuinn also said having a volunteer fire department helped tremendously to reduce expenses for the county. If his staff were paid, he said, fighting a fire of that magnitude would have cost $97,840, including apparatus and personnel costs, not including food.
Commissioners thanked McGuinn for his department’s work on the fire and for protecting residents’ homes. Firefighters from Sunny View initially had to hike to the fire on foot through mountainous and rocky terrain.
“Even though the distance from the bottom of the fire to the top was only 1,650 feet, it was a 22-mile drive to get from the bottom to the top,” said McGuinn. “Conditions were extremely unfavorable, causing the fire to grow rapidly.”
McGuinn said in the afternoon of Monday, Feb. 14 winds reached 40 m.p.h. gusts that caused the fire to spread widely.
There are between 10 and 12 homes at Jude’s Gap. McGuinn said after the state took over command, the Sunny View Fire and Rescue crews spent most of their time protecting those structures.
No structures were lost and no injuries were reported during the fire.
Crews from the Polk County and Henderson County Forest Service initially took command of the fire, then the district office took over and McGuinn said eventually the state’s forest service came in. He said he met firefighters from all over the state, as well as from outside North Carolina. McGuinn said early in the week, the Jude’s Gap fire was the largest fire burning in the United States.
Mutual aid locally was given by fire departments from Mill Spring, Chimney Rock, Green Hill, Saluda, Lake Lure, Edneyville, Sandy Mush and Columbus. Mutual aid was also received from the Polk County Rescue Squad, Polk Emergency Services and the Henderson County Emergency Management.
Commissioners and the audience gave McGuinn a standing ovation during the commissioners’ meeting. McGuinn said he is writing letters and appreciation certificates to give to the mutual aid departments.
The cause of the fire is unknown and remains under investigation.