According to the Landrum Police Department, on Saturday, March 5, a home invasion occurred at a residence in the 100 block of S. Edgewood Avenue in Landrum. Investigators from the Spartanburg County Sheriff’s Office Violent Crime Unit have been called in to assist with the investigation.
A sketch artist from the South Carolina State Law Enforcement Division (SLED) was also called in to assist and has produced a sketch of a white female 16 – 25 years of age wearing some type of covering on her head. 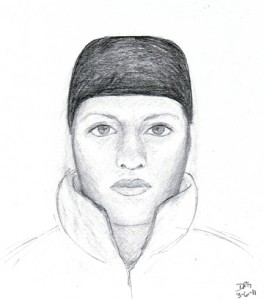 SLED artist's sketch of the suspect in a home invasion that took place in Landrum on March 5.

Authorities are asking for the public’s help in identifying this suspect. Anyone who may recognize this suspect or has information about this incident is asked to call CrimeStoppers at 1.888.CRIME.SC.

The joint investigation into this case is continuing. Officials said no further information could be released without compromising the investigation.