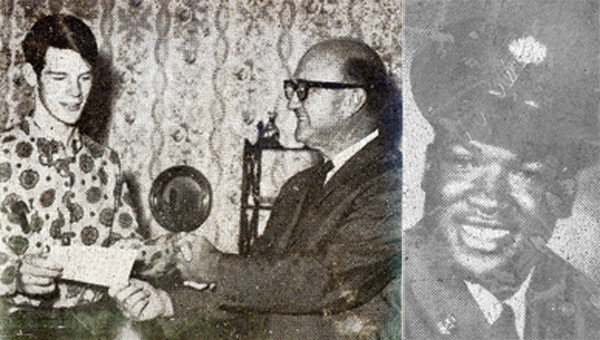 According to Margaret Craig Kell, the older gentleman in the photo on the left is her father, Jack Craig. He was the first plant manager of Hatch Mill in Columbus. Kell said her family moved here around 1951 while her father supervised the building of Hatch Mill, and he remained plant manager until the 1970s or 80s. Hatch was originally a Milliken plant producing woolen fabrics.
The photo on the right is Phillip W. Green Jr., according to his sister-in-law, Ora Green. He was Marvin and Richard Green’s brother. Phillip was killed in Vietnam on June 13, 1970, and this photo appeared in the Bulletin on June 30, 1970.

‘It was the community’s newspaper’