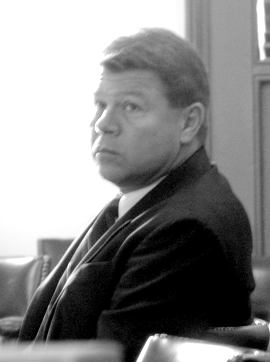 Abril, 49, has been on probation since November 2008 after pleading guilty to two counts of solicitation to take indecent liberties with a minor. After the felony conviction, Abril pled guilty to driving while impaired (DWI) and was convicted of a probation violation for the offense.
Abril’s probation is being handled by the North Carolina Division of Community Corrections in Henderson County.
According to court records, Abril currently has an outstanding balance of $210 for probation supervision and is also behind in payments for a sex-offender-specific treatment program. Abril was suspended from the program for not paying the fees and has not paid his probation supervision fees since June 3, 2010.
Abril has an outstanding balance of $665 for the sex offender treatment program and was suspended in December 2010. Court records say Abril must pay the balance in full in order to be reinstated into the program. Abril also has an outstanding electronic monitoring fee of $90.
Abril has been in and out of court since he was a candidate for Polk County Sheriff in 2006. He was originally charged in August 2006 with five counts of first-degree statutory rape and one count of first-degree sexual offense that stemmed from incidents in 1988 and 1989 involving girls who were 10 and 11 years old at the time. Abril was a police officer with the Polk County Sheriff’s Office at the time of the offenses in 1988 and 1989. He was serving as Columbus Police Chief when he was charged in 2006.
Abril was elected Polk County sheriff in November 2006. In November 2008, Abril pled guilty to two counts of solicitation to take indecent liberties with a minor, both felonies. Conditions of Abril’s sentencing included that he surrender his law enforcement certification, that he spend five years on probation, three of which were supervised, and that he serve 120 days of house arrest. Abril was not required to register as a sex offender. He resigned as sheriff the day before he pled guilty.
While on supervised probation, Abril was arrested by the Polk County Sheriff’s Office in October 2009 for driving while impaired along U.S. 176 in Tryon. He was also originally charged with misdemeanor larceny for allegedly stealing alcohol from Elmo’s Pub & Grill, but those charges were dropped.
Abril was placed on probation and community service for the DWI as well as having his driver’s license revoked for a year. Abril was placed on electronic monitoring for 30 days for violating his probation.
Abril’s original sentence for solicitation to take indecent liberties with a minor included up to two years in prison.