Children in the audience cheered on steam shovel Mary Ann in Tarradiddle's "Mike Mulligan & His Steam Shovel" during 2010's Super Saturday. The Tarradiddle Players will be back March 19, - this year's Super Saturday - with "Commedia Princess & the Pea." The show will be held at the Episcopal Parish Hall at 1:15 and 2:30 p.m. (photo by Mara and Ford Smith)

On Saturday, March 19, the 33rd Super Saturday will turn Tryon into a happy place filled with all sorts of performers bringing delight to children of all ages. And at the Congregational Church at 10:45 a.m. and 2:30 p.m., poet/performer/educator Allan Wolf will stir things up with his unique approach to poetry.

Wolf’s poems for children celebrate kids for who they naturally are – good and bad. After all, what would a poet who boasts he can recite hundreds of poems from memory, yes, but also who didn’t like school, has a pet chicken named Atilla the Hen, has two goldfish named Lewis and Clark, and who dreams of one day living in a house with a secret room write about?

Wolf lists his favorite things during his youth as skateboarding, track, snakes, tarantulas, friends, snow days, girls, music and writing on his bedroom walls. Clearly not a “stuffy” poet. 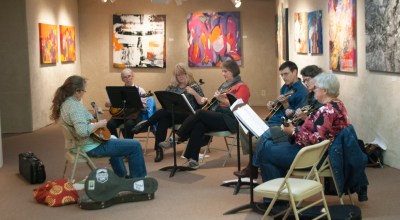